Abu Dhabi T10: Chris Gayle scored an unbeaten 84 not out off just 22 balls with the help of nine sixes and six boundaries to steer Team Abu Dhabi to a nine-wicket win against Maratha Arabians. 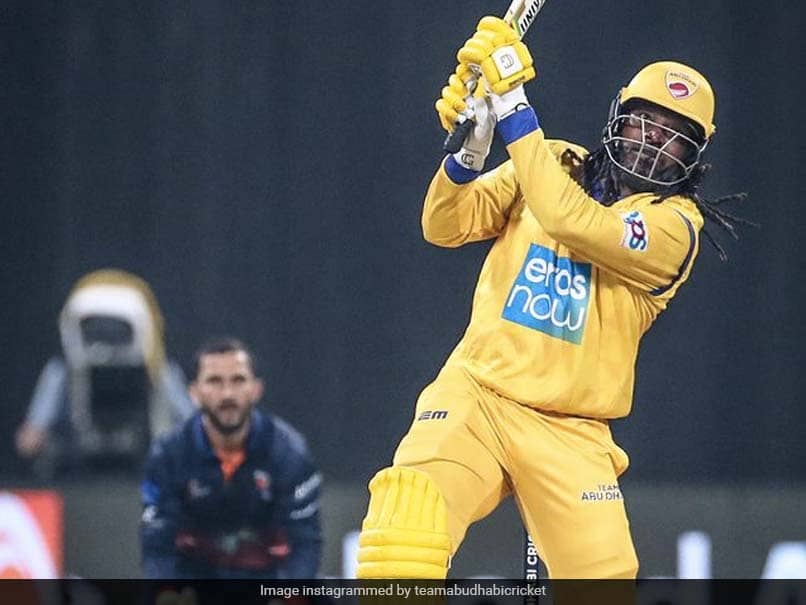 T10 League: Chris Gayle's 78 runs out of his 84 came through boundaries.© Instagram

Chris Gayle scored an unbeaten 84 not out off just 22 balls with the help of nine sixes and six boundaries to steer Team Abu Dhabi to a nine-wicket win against Maratha Arabians in in the Abu Dhabi T10 tournament. Chasing Maratha Arabians' moderate total of 97 runs, Gayle helped powered his team to victory in just 5.3 overs. Gayle dominated the attack right from the word go. He was in his elements from the first over, pouncing on any error in line and lengths from the bowlers. All his sixes and boundaries were hit so effortlessly that it was a treat to watch.

Incidentally, 78 runs out of his 84 came through boundaries. He reached his half-century off just 12 balls and equaled the fastest half-century in T10 history held by Mohammad Shahzad for Rajputs in the 2018 edition.

Earlier, Abu Dhabi won the toss and elected to field. Arabians introduced UAE's 18-year-old opener Alishan Sharafu to open with Mukhtar Ali. Tom Helm bowled a maiden first over to Sharafu. In the second over, Mukhtar hit Rohan Mustafa for three boundaries while Sharafu hit a six to take 19 runs off that over.

Jamie Overton got Mukhtar out by top-edging him to mid-wicket for 14. Mohammad Hafeez joined Sharafu and picked a boundary off Naveen Ul Haq. Sharafu hit Haq to deep mid-wicket for his second six. In the fifth over, Sharafu flicked Jamie Overton's first delivery of the fifth over to the boundary and hit the next for a six over backward square leg. He also hit the last ball of that over to the deep square leg boundary to take 17 runs off the over.

At the halfway mark, Arabians were 52 for 1. Mustafa bowled a tight sixth over giving away just seven runs. Sharafu's fine knock of 33 came to an end in the seventh over when Obed McCoy had him caught behind. Hafeez too followed, caught and bowled by Naveed Ul Haq, for 20 in the eighth over. Shoaib Malik hit two consecutive boundaries off the fourth and fifth deliveries of Naveed's over.

Laurie Evans lifted McCoy for a six over mid-wicket but fell on the fifth ball of that over by getting caught at third man for 8. Tom Helm, who bowled the tenth over gave away just eight and prevented Arabians from reaching the 100-run mark.

Chasing the easy target, Gayle gave Abu Dhabi a flying start. He hit Yamin Ahmadzai for three consecutive boundaries and a six to get 18 runs off the over. Opener Paul Stirling too hit Sompal Kami for two consecutive boundaries of the first two balls of the second over. Gayle hit the fourth, fifth, and sixth deliveries for sixes to take 27 runs off the over. After Mosaddek Hossain picked the wicket of Stirling with the second ball of the third over, Gayle then went on to hit the next four balls for two boundaries and two sixes.

Arabians introduced UAE 16-year-old Maroof Merchant into the attack. Though he bowled the first four balls tightly, Gayle hit his last two deliveries for sixes. Ishan Malhotra gave away only ten runs in the fifth over. Gayle hit the third ball of the sixth over from Mukhtar over mid-wicket to reach the target to the relief of all bowlers and fielders.

Sheikh Zayed Stadium, Abu Dhabi Cricket
Get the latest updates on IPL 2021, IPL Points Table , IPL Schedule 2021 , live score . Like us on Facebook or follow us on Twitter for more sports updates. You can also download the NDTV Cricket app for Android or iOS.