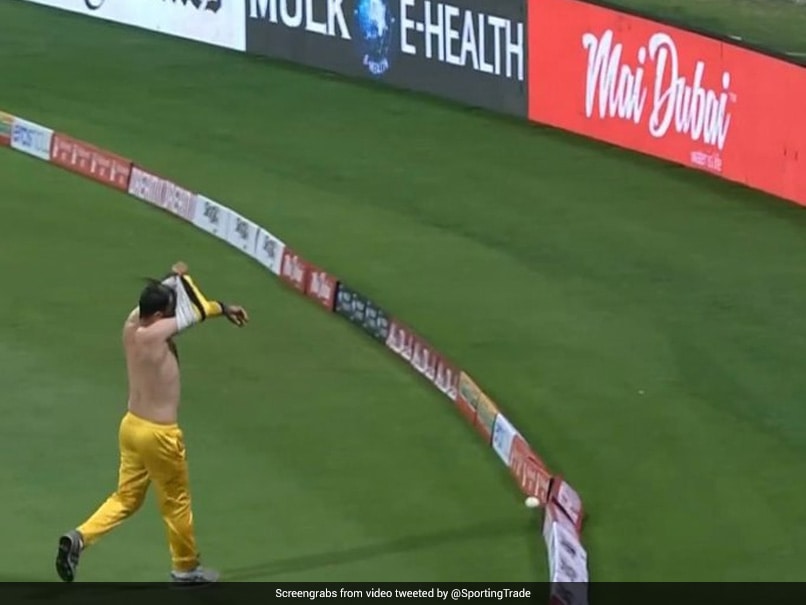 Rohan Mustafa was changing jerseys when the batsman hit a boundary past him.© Twitter

The Abu Dhabi T10 league has provided plenty of entertainment so far. From Nicholas Pooran's swashbuckling innings to Wayne Parnell's hat-trick, there has been a plethora of cricketing talent on display in the tournament. Monday's game between Team Abu Dhabi and Northern Warriors was no different, with the game going down to the very last delivery. However, the highlight of the match was a bizarre incident that has probably not been witnessed in the sport before. UAE international Rohan Mustafa, who plays for Abu Dhabi, was fielding at the boundary when Warriors batsman Waseem Muhammad hit the ball towards him.

However, Mustafa was changing his jersey, and despite running towards the ball, he only had half the shirt on and ended up conceding a boundary, leaving both opposition players and his teammates in splits.

Just when you think you've seen it all pic.twitter.com/mjveCV5cvX

The match itself was a thriller, going down to the wire with a final-ball finish.

Northern Warriors openers Waseem Muhammad and Lendl Simmons put them in cruise control in the chase, scoring at a rapid pace. They were both at the crease when they needed 15 runs off the last over. Muhammad hit a boundary and a six off the first two deliveries, and with two wides bowled in between, the equation came down to three runs needed off four deliveries.

However, Jamie Overton managed to trap him LBW on the third legal delivery of the over, ending a brilliant knock of 76 off 34 deliveries.

The drama was still not over, as Nicholas Pooran's mis-hit was caught at long-on off the next delivery, leaving them needing three off two deliveries. Simmons took a single to bring the equation down to two off the final delivery, but Rovman Powell flicked the low full toss to deep midwicket where a fumble - by Mustafa himself - allowed the batsmen to run two and win in dramatic fashion.

Rohan Mustafa Cricket
Get the latest updates on ICC Women's Cricket World Cup 2022 and IPL 2022, check out the Schedule , Live Score and IPL Points Table. Like us on Facebook or follow us on Twitter for more sports updates. You can also download the NDTV Cricket app for Android or iOS.