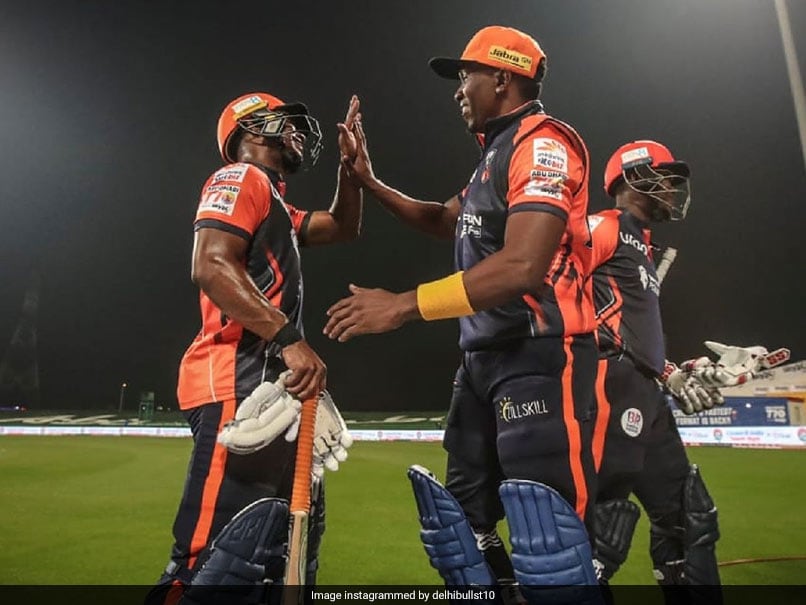 Delhi Bulls brilliantly chased down Bangla Tigers' impressive total to win the third match of the Abu Dhabi T10at the Abu Dhabi Zayed Cricket Stadium by seven wickets. Bangla Tigers' opener Johnson Charles and skipper Andre Fletcher, through a 101 partnership, had posted a total of 128 for 2 in 10 overs. Charles hit 73 runs off 35 balls with six boundaries and five sixes, but his effort went in vain before the systematic chase by the Delhi Bulls batsmen.

Bangla Tigers had earlier won the toss and elected to bat.

Johnson Charles and skipper Andre Fletcher began scoring at a brisk pace. In the second over, Fletcher hit Fidel Edwards for two consecutive sixes. In the third over, Charles launched his spree of sixes with a cracking hit off Amad Butt.

Their 50 runs partnership came in just 3.5 overs. Charles accelerated the run flow further by hitting Kashif Daud for two sixes in the fifth over. He reached his half-century in just 20 balls.

Charles did not spare Dwayne Bravo too and hit him for two consecutive sixes in the sixth over. The 100 runs partnership came in 6.4 overs.

Bravo ended the partnership with the first ball of the eighth over when he clean bowled Fletcher with an accurate yorker for 32. In the ninth over, Edwards dismissed Tom Moores by having him caught by Bravo at extra cover for 2.

Afif Hossain joined Charles and took the score to 128. Charles remained unconquered to ensure a run rate of 12.80.

Delhi Bulls opener Rahmanullah Gurbaz began aggressively by hitting the first ball of the innings from Mujeeb Ur Rahman for a six. He also picked two boundaries to get 18 runs off the first over. He continued his big-hitting and scored two boundaries off Mohammad Irfan.

He also pulled Karim Janat elegantly over mid-wicket for a six in the third over. Off the last ball of that over, Janat produced an accurate yorker to force Gurbaz to play on to this wicket. His 41 runs came off just 15 balls with five fours and two sixes

Next man Ravi Bopara rode his luck getting dropped twice in the fifth over off Mujeeb Ur Rahman. At the halfway mark, Delhi Bulls needed 57 runs. Opener Evin Lewis pulled George Garton for a six in the sixth over.

In the seventh over, Bopara fell hitting high to Qais Ahmed at deep square leg off Fazalhaq Farooqi for 38. Next man Mohammad Nabi too fell for a duck off the first ball of the eighth over.

Undaunted by the fall of wickets, Lewis maintained the run flow and backed by Sherfane Rutherford (11 not out) took their team to the target with seven balls to spare.

Ravi Bopara Cricket
Get the latest updates on IPL Auction 2023 and check out  IPL 2023 and Live Cricket Score. Like us on Facebook or follow us on Twitter for more sports updates. You can also download the NDTV Cricket app for Android or iOS.