"That's What I Do": Barack Obama Nonchalantly Buries 3-Pointer In Viral Video. Watch

Barack Obama once again proved he is an absolute baller, nonchalantly sinking a three-pointer during a campaign event with Joe Biden in Michigan. 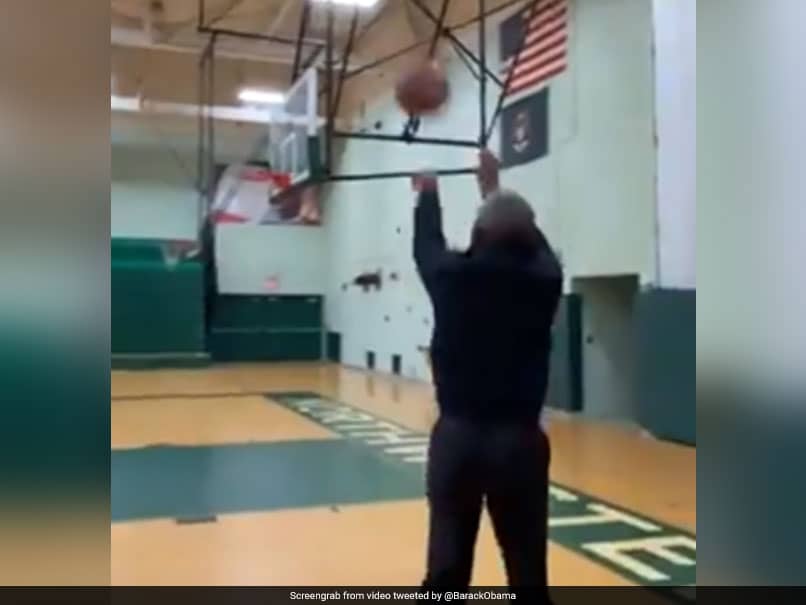 Former US president Barack Obama is giving his ex-vice president Joe Biden a helping hand by campaigning for the incumbent Democratic presidential nominee. During a campaign event at a high school gym in Flint, Michigan on Saturday, Obama once again showed what a baller he is by nonchalantly nailing a three-pointer. The former US president was passed a basketball as he was leaving the gym. Obama casually took aim with his face mask on, and sunk the shot, before proclaiming, ""that's what I do."

Barack Obama shared the video on his official Twitter page, which then quickly went viral as Twitterati marvelled at his basketball skills.

Among the many replies on Obama's tweet, one particular one stood out. It was from LA Lakers superstar LeBron James, who was recently named Most Valuable Player of the 2020 NBA Finals.

"Now you just showing out now my friend!! That's what you do huh?? Ok ok I see. All cash!" James tweeted.

Now you just showing out now my friend!! That's what you do huh?? Ok ok I see. All cash!https://t.co/8pZzXLJIJj

Biden and Obama made their first joint appearance on the campaign trail in Flint, a last-ditch effort to garner votes for the former vice-president ahead of Tuesday's election.

Several polls suggest that Biden is currently in the lead against President Donald Trump. The latest Fox News poll, released on Friday, as well as surveys done by the New York Times and Siena College, placed Biden eight points ahead of Trump nationally.

In some of the major battleground states, including Florida, Pennsylvania and North Carolina, all of whom voted in favour of Trump in the 2016 elections, Biden holds a comfortable lead, as per the latest polls.

After the latest campaign even in Flint, Michigan, Obama is also set appear at events in Georgia and Florida on Monday.

Comments
Topics mentioned in this article
Basketball
Get the latest updates on IPL 2021, IPL Points Table , IPL Schedule 2021 , live score . Like us on Facebook or follow us on Twitter for more sports updates. You can also download the NDTV Cricket app for Android or iOS.