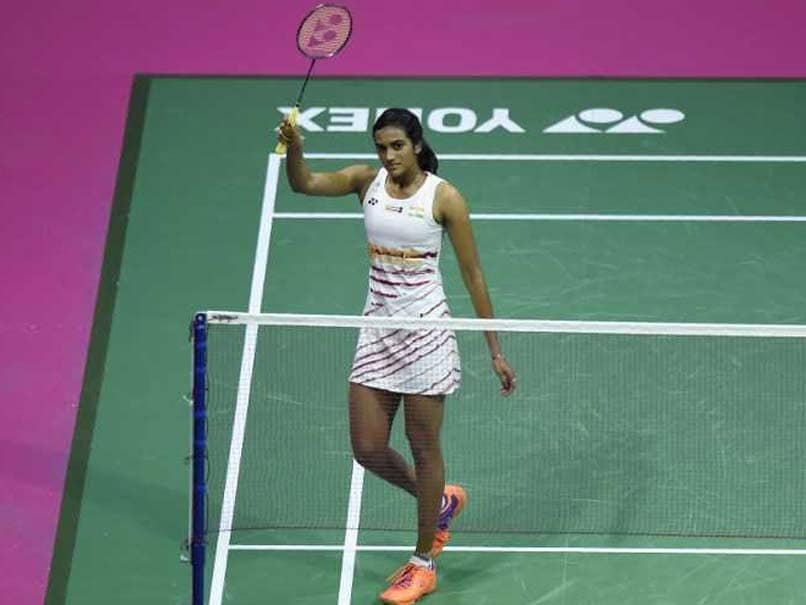 PV Sindhu will look to avenge her loss to Nozomi Okuhara in the World Championship final.© AFP

PV Sindhu avenged her World Championship 2017 loss in Glasgow on Sunday by beating Nozomi Okuhara 22-20, 11-21, 21-18 in the Korea Open 2017 women's singles final to clinch her third Superseries title. Sindhu made history by becoming the first Indian to win the Korea Open. The win, though, didn't come easy as Okuhara fought Sindhu right to the end, never giving away even an inch. Sindhu saved two game points to win the first game but was completely outclassed in the second as the Japanese came storming back. The Indian star fought back brilliantly by taking a big lead in the mid-break of the decider and despite a late surge from Okuhara, Sindhu held on to win the crown.

12:35 IST: Thanks for joining our live badminton coverage. All the cricket fans can tune-in to our live blog for the first ODI between India and Australia.

12:32 IST: This is Sindhu's 3rd Super Series title. She has avenged her World Championship loss but was made to work extremely hard. She is also the first Indian to win the Korea Open.

12:30 IST: Okuhara should hold her head up high. She never gave up and fought Sindhu right to the end.

12:26 IST:Okuhara manages to save one match point with a well disguised drop shot.

12:25 IST: Championship point for her Sindhu!

12:23 IST:An epic rally comes to an end with Okuhara netting her backhand. Sindhu is on the ground gasping for air after that.

12:20 IST:Powerful smash from Sindhu. She is just 3 points away from clinching the title.

12:19 IST:Great defense from Okuhara. Sindhu peppered her backhand but she just refused to give up.

12:16 IST:Another grueling final between these two players. Sindhu currently holds the advantage at 16-13.

12:12 IST:Two consecutive points for Okuhara and has trimmed Sindhu's lead to 3 points.

12:08 IST:Two consecutive points for Okuhara after the break.

PV Sindhu has a 6-point advantage at the change of ends. Leading 11-6 against Okuhara. Keep going, girl!!! #KoreaSS

11:57 IST:First point of the deciding game goes to Okuhara.

Okuhara dominates the proceedings in the second game to win it 21-11 against Sindhu. All to play for in the decider! #KoreaSS

Okuhara leads 11-6 at the break of the second game against Sindhu. #KoreaSS

11:44 IST:What a brilliant rally! Great play from both players but Sindhu nets her shot to hand the point to Okuhara.

11:18 IST:Absolutely brilliant defemsive play from Sindhu helps her make it 11-12.

Okuhara edges past Sindhu and takes a 2 point lead at the mid-game interval. Leading 11-9. #KoreaSS

11:11 IST:Unforced error by Sindhu. She nets her backhand as Okuhara makes it 7-7.

11:07 IST:Sindhu took a 2-0 lead but the Japanese quickly caught up. Remember the Indian ace had started brilliantly in all the games of the worlds final but Okuhara always managed to catch up.

11:06 IST:Sindhu wins the first point of the women's singles final.

PV Sindhu takes center stage to a thunderous applause and history is in the reckoning as she faces Nozomi Okuhara. Let's begin! #KoreaSS

10:54 IST:The medal ceremony is currently on and then straight to the Sindhu's final. The excitement is certainly building up. We are in for a humdinger if this final is anything close to the World Championship finale clash between Sindhu and Okuhara.

10:48 IST:Christie manages to save the match point. Fascinating viewing this. The two players are going all out!

10:45 IST:It's neck and neck in the men's final between the two Indonesian players. 20-19 to Ginting right now,

10:30 IST: Hello and welcome to live blog of the match between PV Sindhu and Nozomi Okuhara. Not too long left now.

Wishing @Pvsindhu1 all the very best for the #KoreaSS final! pic.twitter.com/KmJZwbBdCT

Sindhu defeated China's He Bingjiao in the semi-finals. The 22-year-old Indian had come into the match with a 3-5 head-to-head record, having lost to the Chinese at the Asia Badminton Championship this year. But that didn't matter as Sindhu saw off the World No.7 21-10, 17-21, 21-16 in a match that lasted an hour and six minutes.

Okuhara, the Olympic bronze medallist, entered the final with a 21-17, 21-18 win over World No.2 compatriot Akane Yamaguchi, seeded second.

Comments
Topics mentioned in this article
Live Blogs Live Score PV Sindhu Badminton
Get the latest updates on IPL 2021, check out the IPL 2021 Schedule and Indian Premier League Live Score . Like us on Facebook or follow us on Twitter for more sports updates. You can also download the NDTV Cricket app for Android or iOS.