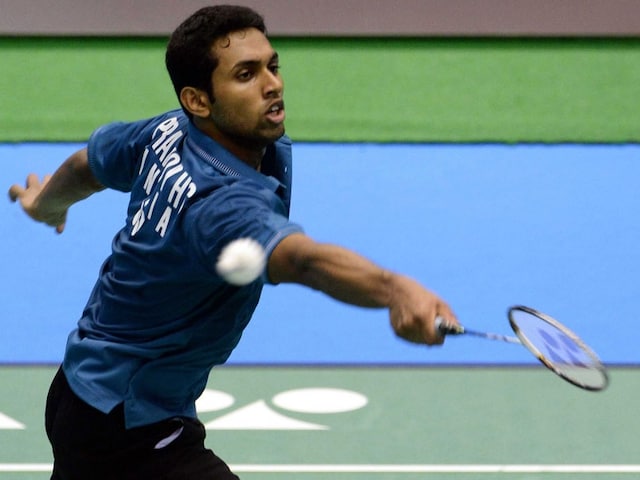 Indian shuttler HS Prannoy dumped Denmark's Hans-Kristian Vittinghus in straight games to progress to the men's singles quarterfinals of the French Open Super Series. Prannoy, who regained his career-best ranking of World No 12 that he had achieved in June two years ago, took just 31 minutes to see off Vittinghus 21-11 21-12 to set up a clash with 2016 Australian Open finalist Jeon Hyeok-jin of Korea. "Good win against Vittinghus last night to advance to the Quarterfinals!! Tricky one awaiting later in the evening," Prannoy tweeted after the match. The Indian had lost to the World No 31 Jeon in the Canada Open in a close match this year.

In another men's singles match, it was curtains for Singapore Open champion B Sai Praneeth after he lost 13-21 17 -21 to Japan's Kenta Nishimoto late yesterday.

Young Indian doubles pair of Satwiksairaj Rankireddy and Chirag Shetty, meanwhile, notched up a stunning win over World No 6 Danish combo of Mads Conrad-Petersen and Mads Pieler Kolding to reach their second quarterfinal of the season.

The World No 32 Indian pair, who had reached the quarters at Korea Open, dished out a superb performance to shock the 2016 European champions Conrad-Petersen and Kolding 22-20 12-21 21-19 in a match that lasted an hour.

"We are very happy to win the match today. We were leading 16-8 in the third game but made some simple errors and it was 19-all. Somehow we managed to win," Chirag told PTI.

The Indian pair will square off against another Danish pair of Mathias Boe and Carsten Mogensen, who are the 2012 London Games silver medallists.

In the quarterfinals, newly-crowned Denmark Open champion Kidambi Srikanth will face fourth seeded Chinese Shi Yuqi, who had reached the finals at All England Championship in March this year.

Srikanth, who jumped to World No. 4 yesterday, has a 2-0 record against the Chinese with both the victories coming this season at Singapore and Australia.

Olympic silver medallist P V Sindhu will meet World No. 10 Chinese Chen Yufei, who had beaten the Indian in the opening round at Odense last week.

However, the Indian will look at her World Championship win over the Chinese for inspiration as she looks to break the 2-2 deadlock.

Comments
Topics mentioned in this article
HS Prannoy Badminton
Get the latest Cricket news, check out the India cricket schedule, Cricket live score . Like us on Facebook or follow us on Twitter for more sports updates. You can also download the NDTV Cricket app for Android or iOS.