AUS vs IND: India beat Australia by 13 runs in the third One-day International in Canberra on Wednesday. Australia won the series 2-1. 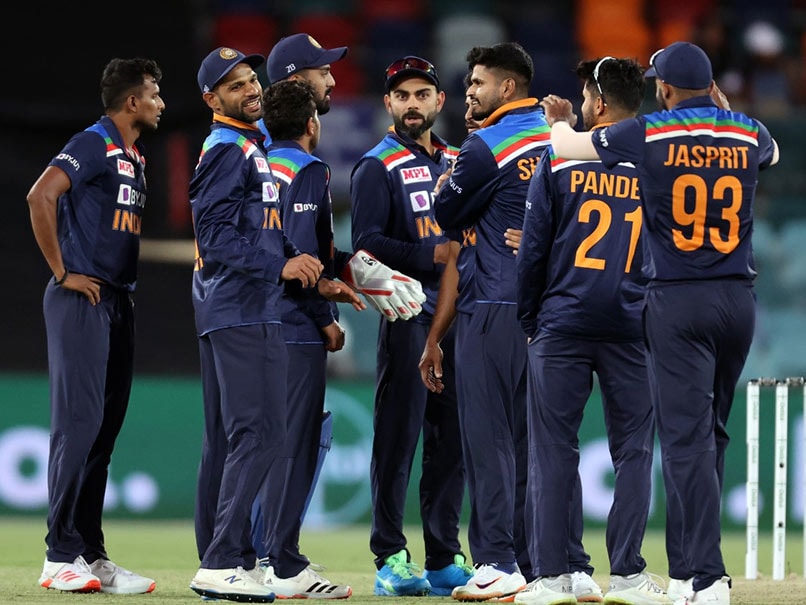 Australia vs India: India won the third and final ODI of the three-match series by 13 runs.© AFP

India survived a lower-order reprise from Glenn Maxwell (59) and Ashton Agar (28) to register their first win on the tour of Australia, beating the hosts by 13 runs in Canberra on Wednesday in the third and final ODI. With Australia chasing a target of 303 with just four wickets in hand and 93 runs to get in 12 overs, the game looked to be titled in India's favour but some remarkable power-hitting by Maxwell and deft touches by Agar brought the hosts back in the hunt but some consistent bowling from the Indians, helped with some good fielding, ensured that India closed out the win in the last over.

Maxwell took debutant T Natarajan for a six and a four in an 18-run 44th over after having accumulated 14 in the 40th, also off Natarajan, to keep Australia in sight of the target.

However, Jasprit Bumrah clean bowled Maxwell in the 45th and debutant T Natarajan got Agar caught at extra cover in the 48th to kill the contest in the last five.

With 15 needed off the last over with one wicket in hand, Bumrah trapped Adam Zampa lbw on the third ball to bowl Australia out for 289.

Earlier, India looked up against another challenge where they found themselves at 152/5 at the end of 32 overs after Virat Kohli won the toss and batted.

The top-order didn't really deliver consistently and after losing Shikhar Dhawan early, Kohli added 56 runs with Shubman Gill for the second wicket before Gill, Shreyas Iyer (19) and KL Rahul (5) departed in quick succession, and India were reduced to 123 for 4.

However, the two unleashed fury at the death as India accumulated 110 runs off the last 10 overs.

The late assault took India to 302 for 5 that was a bit too much for Australia.

Jasprit Bumrah T Natarajan Australia vs India 2020-21 Australia vs India, 3rd ODI Cricket
Get the latest updates on IPL Auction 2023 and check out  IPL 2023 and Live Cricket Score. Like us on Facebook or follow us on Twitter for more sports updates. You can also download the NDTV Cricket app for Android or iOS.