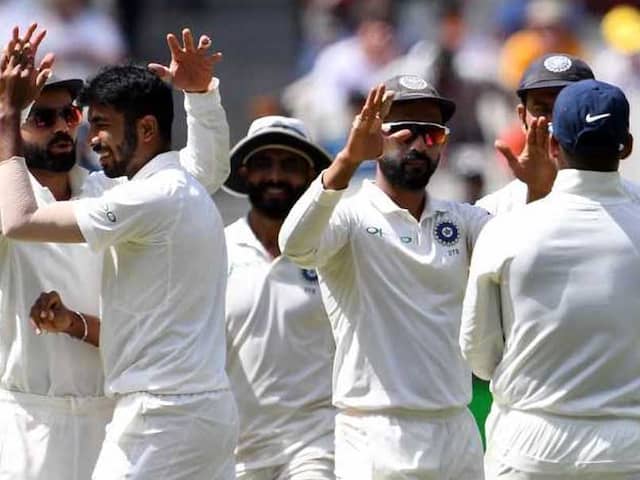 Jasprit Bumrah and Ravindra Jadeja claimed three wickets each as India registered an emphatic 137-run win in the Boxing Day Test in Melbourne on Sunday to take an unassailable 2-1 lead in the four-match series Down Under. Fast bowler Ishant Sharma (2/71) claimed the final wicket of the day in Nathan Lyon (7) to wrap Australia for 261 runs in a tough chase of 399 runs. Mohammed Shami also contributed with two wickets but didn't bowl a single over on the rain-delayed Day 5 at the MCG. Earlier, the morning session was washed out due to rain. All-rounder Pat Cummins waged a lone battle with a 114-ball 63 after the home team's collapse in successive innings of the Test match. Pat Cummins scored a gritty half-century on Saturday to keep Australia alive on the penultimate day of the Test. The visitors got extra 30 minutes to bundle out the Australian team but failed to dismiss the tail-enders. Cummins was on 61 (not out) and Nathan Lyon unbeaten on six as Australia ended the Day 4 at 258/8, 141 runs away from win. Skipper Virat Kohli has declared India's second innings at 106 for eight, leaving Australia to chase a record fourth innings total of 399 at the Melbourne Cricket Ground. (SCORECARD)

07:55 IST: And that brings an end to the play on Day 5 of the third Test between India and Australia. Thank you for joining us for the live coverage.

The co-captains leading the Aussie side in the handshakes after India claim a great Test win #AUSvIND pic.twitter.com/ZVwD3LY6uP

07:48 IST: WICKET! AND INDIA BEAT AUSTRALIA BY 137 RUNS. Ishant Sharma claims the final wicket, removes Nathan Lyon for seven runs to bowl out Australia for 261 in 89.3 overs. India conclude the year on a high.

07:47 IST: This has been a career-best knock for Pat Cummins.

07:41 IST: WICKET! Jasprit Bumrah gives India a much-needed breakthrough, dismisses Pat Cummins for 63 to claim his third wicket. Cummins scored five boundaries and a six in his gritty 114-ball knock. It brings an end to the 46-run partnership stand and a resilience to keep Australia in contest.

07:39 IST: Nathan Lyon survives a tough over by Ishant Sharma. Australia are still 138 runs away from the victory.

07:35 IST: Bumrah starts with a maiden over. Nathan Lyon will be on strike for the next over.

07:31 IST: Jasprit Bumrah to attack from the other end.

07:27 IST: The ground staff is back on the field. But this time, to fix the foot marks for Ishant Sharma.

07:24 IST: We are all set for some cricket action on Day 5 in Melbourne. Following a washed out first session, Pat Cummins and Nathan Lyon are out in the middle to resume Australia's tough chase. Ishant Sharma to bowl the first over for India.

There are now a minimum of 71 overs remaining today. Lunch from 12:15 to 12:55 local time #AUSvIND pic.twitter.com/O8flfEHWZx

06:48 IST: The early lunch has been taken due to rain. The play will resume at 7:25 IST if there's no further rain in Melbourne.

06:10 IST: The rain has got heavier in Melbourne. The sky looks gloomier now.

05:28 IST: The rain is getting heavier in Melbourne. The wait continues.

Weather permitting, we will have a 11AM (local time) start here at the MCG #TeamIndia #AUSvIND pic.twitter.com/lnvPpOVVCw

05:15 IST: The covers are coming off. The umpires are out on the field, inspecting the conditions.

04:55 IST: The Melbourne Cricket Ground is currently under a cloud cover.

The covers are off at the MCG but there is a few more showers on the radar ... #AUSvIND pic.twitter.com/ng4htJNnC9

Play to start on time if there is no further rain #TeamIndia #AUDvIND pic.twitter.com/ijEp9o9YWD

04:50 IST: Hello and welcome to our live coverage of the fifth and final day of the Boxing Day Test between India and Australia in Melbourne.

The previous biggest successful run chase at the ground came in 1928, when England made 332 for seven. India still have a day in hand to wrap up the last two wickets as they zero in on a first-ever series win Down Under. There is just the Sydney Test next week to go, with the series level at 1-1. Australia's task was made harder when Aaron Finch again flopped, throwing his role as a Test opener under ever more scrutiny with speculation that he either has to drop down the order in Sydney or make way for someone else.

He played a poor shot to pace spearhead Jasprit Bumrah, who snared six wickets in the first innings, and was caught by Kohli for three. Fellow opener Marcus Harris followed him back to the pavilion for 13, getting an inside edge from spinner Ravindra Jadeja to Mayank Agarwal close in. Usman Khawaja was the next to go after a lively 33, trapped LBW by Mohammed Shami. He chose to review the decision with the ball-tracking technology showing it clearly hitting the off stump. When Shaun Marsh was also trapped leg before by Bumrah for a brisk 44 and his brother Mitch, another candidate for the Sydney axe, fell for 10, Australia's faint survival hopes were fading fast.

Australia Cricket Team Australia vs India 2018/19 Australia vs India, 3rd Test Live Score Live Cricket Score Live Blogs Cricket
Get the latest Cricket news, check out the India cricket schedule, Cricket live score . Like us on Facebook or follow us on Twitter for more sports updates. You can also download the NDTV Cricket app for Android or iOS.