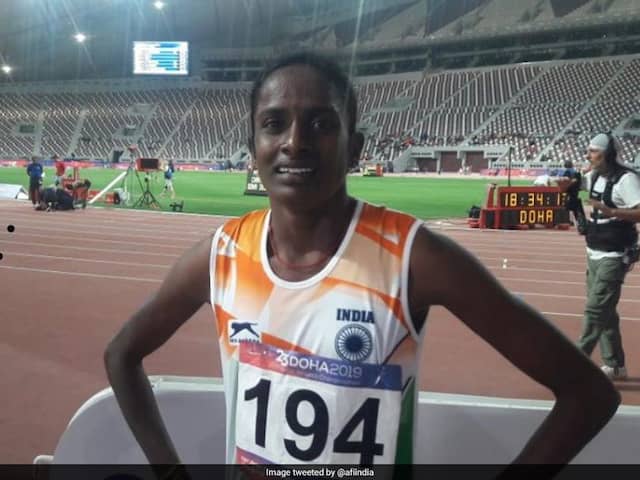 Gomathi Marimuthu, who won the 800 metres gold at the Asian Athletics Championships last month, was Tuesday handed a provisional suspension after being tested positive for a banned substance. The 'A' sample of the 30-year-old runner from Tamil Nadu, who clocked 2 minute and 2.70 seconds to win the gold on April 22, has returned positive for 19-norandrosterone, a metabolite of nandrolone (an anabolic steroid), in the test conducted during the Asian Athletics Championships in Doha.

"Yes, Gomathi has tested positive for a steroid and she has been placed under provisional suspension," a top source told PTI on condition of anonymity.

"The AIU confirms Provisional Suspensions against Indian sprinter (sic) Gomathi Marimuthu and Bahraini long-distance runner Eunice Jepkirui Kirwa, both for a violation of the @iaaforg Anti-Doping Rules," the AIU tweeted.

In the updated list, the AIU entered "Presence of a Prohibited Substance (19-norandrosterone) (Article 2.1)" against Gomathi's name, adding "Notice of Allegation Issued".

A family member of Gomathi said that she was innocent and had never used banned substances.

"Till now, we have not got any information on this issue from any authority. She is innocent and she has not taken any prohibited substance," the family member said from Gomathi's home in Tamil Nadu.

It is learnt that Gomathi had earlier tested positive for a banned substance in the sample the National Anti-Doping Agency (NADA) collected in Patiala during the March 15-18 Federation Cup but was not communicated by the national anti-doping watchdog on time.

"We have learnt that Gomathi also tested positive in the sample taken during the Federation Cup which was held in mid March. But that report is yet to reach us even now, after more than two months. That report is on the way, we have told.

"We have no idea why the NADA did not inform us on Gomathi's dope positive result to us before the Asian Championships. There was more than one month's time in between," the AFI official said.

Gomathi has been on the national circuit for some time but her timing has been mediocre. Not a national camper, Gomathi's 2:03.21 performance that gave her a gold in the Federation Cup in March raised questions over her sudden improvement.

"She was not in the national camp and that is why we have been emphasising on the requirement that athletes who have to take part in the international events should be from the national camp," the official said.

Calls to NADA director general Navin Agarwal were not answered.