India have finished the 2019 AAC with 3 gold, 7 silver and 7 bronze medals, fourth on the overall medals tally, only behind Japan, China and Bahrain. 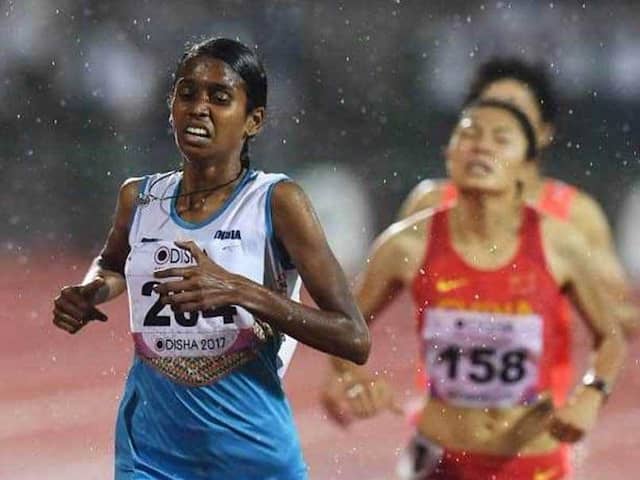 PU Chitra won the gold medal in the 1500-metre women's final at the 2019 Asian Athletics Championships being held at Doha in Qatar on Wednesday, the final day of the event. She recorded a time of 4 minutes and 14.56 seconds to give India a third gold medal of the meet. Chitra's winning strategy in the final was to stay with the race leaders for the entire duration, only to come up with a dash in the final 300 metres of the race, pulling ahead of the others with only a few paces left. Gashaw Tigest of Bahrain, who was leading the race throughout but had to be content with the silver medal eventually, finished with a time of 4:14.81 minutes, 25 milliseconds behind the Indian.

Chitra, who had been off the track with a knee injury for three months since her bronze medal at the Asian Games last year, has proved her doubters wrong with her showing.

In the men's 1500-metre final a little later, Ajay Kumar Saroj also put up a great show to clinch the silver medal, finishing only behind the gold medallist from Bahrain. His timing, 3:43.18 minutes, was a season best for him. His time was just 0.006 seconds faster than the bronze medallist from Qatar.

There were even closer margins on display though. Dutee Chand won the first medal of the day for India on the fourth and final day, also managing a season best of 23.24 seconds in the 200-metre sprint final to win a bronze medal.

She started off the blocks a little sluggishly but came up with an explosive burst of speed in the last 25 metres to force a photo finish and eventually her way onto the podium.

Dutee's time was just 0.001 seconds quicker than the 4th-placed sprinter and it was only when the giant screens at the Khalifa Stadium showcased the final standings that Dutee got confirmation that she had won the bronze, then breaking into a smile. She had finished just outside the medal places -- at 4th and 5th -- in the women's 100-metre sprint and the 4*100-metre relay earlier at the meet.

There was high drama in the 4x400 women's relay final, where India (Prachi, MR Poovamma, Saritaben Gayakwad & VK Vismaya) finished with a silver medal, just missing out on the gold to Bahrain. After MR Poovamma had conceded a sizable lead at the end of the second lap, Saritaben and Vismaya had done well to get the Indian team in the lead.

However, the Bahraini sprinter Salwa Naser just inched ahead of Vismaya at the very end of the race to consign India to second place with a time of 3:32.21 minutes. Gold medallists Bahrain were only marginally ahead, recording a time of 3:32.10 minutes.

India's men's team of Kunhu Muhammed, Jeevan KS, Mohammad Anas & Rajiv Arokia seemed to have clinched a silver in the 4x400 relay final, finishing second to Japan. However, the Indian team was disqualified for "impeding other competitors" during the race, following a complaint by China.

In the men's 5000-metre final, there was disappointment in store for Indian fans as Murali Gavit, though coming up with a personal best time of 13:48.99 minutes, could not hold on to his medal place. He was in third position at the beginning of the last lap but finished fifth eventually.

India's earlier gold medals had been won by half miler Gomathi Marimuthu and shot putter Tejinderpal Singh Toor on Monday.