Asia Cup 2022, IND vs HKG: Suryakumar Yadav said he had "never experienced it" after Virat Kohli bowed down to him after his magnificent knock against Hong Kong. 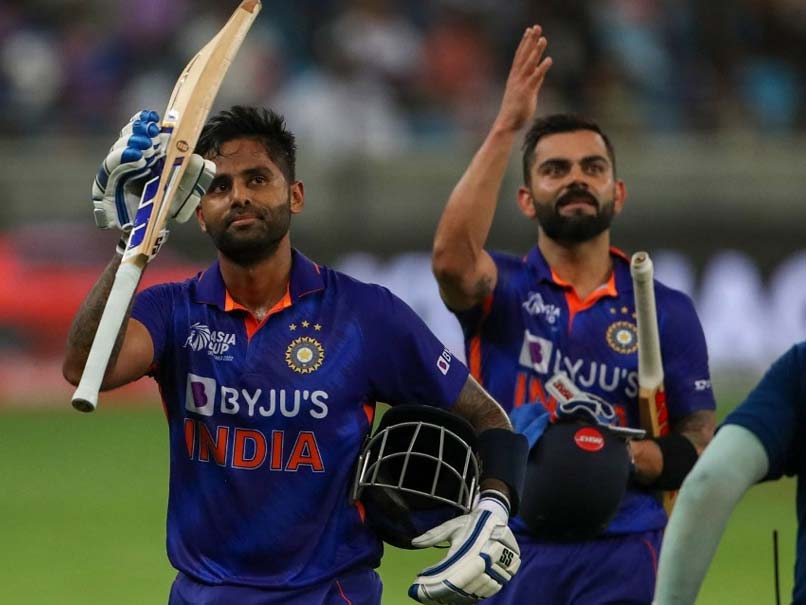 IND vs HKG: Suryakumar Yadav and Virat Kohli walk off after their unbeaten 98-run stand.© AFP

Suryakumar Yadav was at his scintillating best against Hong Kong in the Group A Asia Cup match on Wednesday as he went on to play an unbeaten knock of 68 runs off just 26 balls with the help of 6 fours and as many sixes and such was the brilliance of his knock, that even a batter of Virat Kohli's calibre bowed down to him after seeing the carnage on display. The Indian innings was going nowhere with the score being 94/2 in the 13th over. Both Virat Kohli and KL Rahul were almost going run-a-ball, but Suryakumar came out with great intent from ball one, and made a mockery of Hong Kong's bowlers on a pitch where it was being difficult to hit through the line.

Apart from Suryakumar, Virat Kohli also played an unbeaten knock of 59 to help India post 192/2 in 20 overs. Hong Kong was then restricted to 152/5, and as a result, Rohit Sharma and co. sealed their place in the Super-4 stage.

"The situation was such that I had to bat in this (aggressive) fashion. At the start, the wicket was slow, but as soon as I walked out to the crease, Virat Bhai also told me to express myself and my plan was also to play my natural game, so yeah, I really enjoyed it. The plan was clear, I had no doubt on what I needed to do, there was no doubt, so I really enjoyed it," Suryakumar Yadav said in a post-match press conference.

"Virat Kohli's gesture (bowing down) at the mid-innings break was very heartwarming. I have never experienced it, I was just wondering why he is not walking back to the dressing room," Suryakumar said about Kohli's tribute to him.

"He was walking behind me, I told him to walk alongside me to the dugout," he continued.

"I really enjoyed batting alongside him and I even told him that. We were talking in the middle about what needs to be done in different situations. I have not played as many T20Is as him, so having the experience at that stage in the middle was crucial," he added.

Further talking about his knock, the right-handed batter said: "I was playing on the same track as others (laughs). My plan was clear, I just wanted to express myself. Sometimes, it comes off, and sometimes it doesn't. Today was lucky for me. Batting first sets a different kind of challenge but we are trying to figure out how to go about setting targets while batting first. We have enough firepower to post good totals on the board."

"I always try to play my natural game. I also try to play according to situations. If you are batting first, then you need to post a total on the board. The overs 7-15 are important because teams try to control the game. I just look to express myself. If it comes off, it's okay and if I don't succeed, then there is the next game. The experience has been really good. Before this, I have played many T20s for my franchise and domestic cricket as well. Coming here, it was just how I adapt to the pressure, and responsibility. This is what I am trying to do whenever I am going to bat. That's the thing I am focusing on right now, it is going well, for now, touchwood."

Talking about KL Rahul who scored 36 runs off 39 balls against Hong Kong, Suryakumar said: "He is coming back after an injury, he also needs some time right now. And we have that time, and as I said, I am really flexible to bat at any number. There are lots of things we are trying, we will see how it goes."