Asia Cup 2022: There was confusion in Pakistan's Super 4 match against Sri Lanka as the umpire seemingly signalled for a DRS review when Babar Azam had not asked for it. 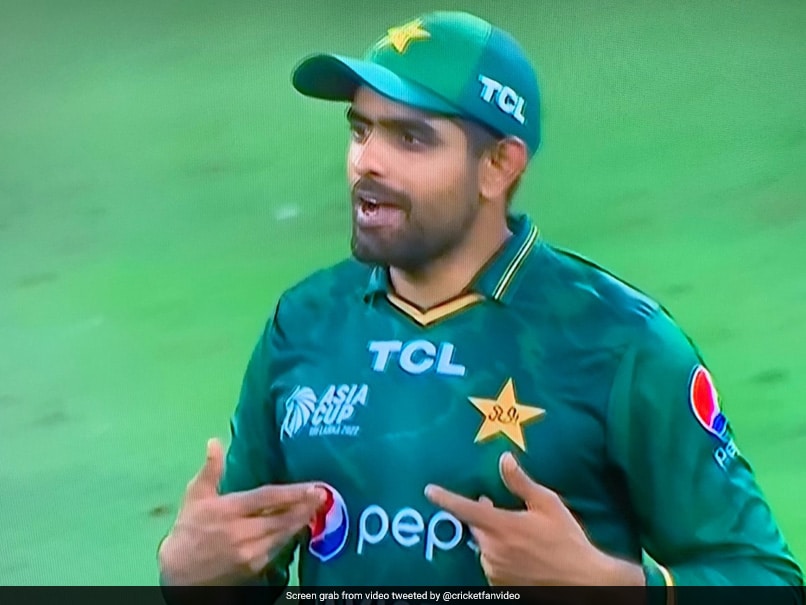 Babar Azam talks to the umpire amid confusion over a DRS call.© Twitter

The final Asia Cup Super 4 match between Pakistan and Sri Lanka may have been a dead rubber since both teams were already in the final, but that didn't mean there was no drama in the match. In what was a dress rehearsal for the summit clash, both teams fought hard and Sri Lanka eventually emerged winners in a low-scoring game. After bowling Pakistan out for 121, Sri Lanka were 103/4 after 15 overs. Then, there was a moment of confusion in the next over as Pakistan went up in appeal after Mohammad Rizwan thought Dasun Shanaka had nicked one behind to him.

Hasan Ali bowled a short one that the Sri Lanka skipper tried to ramp. However, he missed his shot and the ball went to wicketkeeper Rizwan.

Rizwan was confident in his appeal, but the umpire said not out. As Pakistan players discussed, the umpire signalled for a DRS review.

However, Pakistan captain Babar Azam was seen walking to the umpire and mouthing "Kaptaan mai hu (I am the captain)," as he had not signalled for the review.

Replays showed the ball had not touched the bat and Pakistan lost the review.

Shanaka was out the next over, but Pathum Nissanka hit 10 runs off the last three deliveries to ensure Sri Lanka got over the line with three overs to spare.

Nissanka was unbeaten on 55 off 48 deliveries as he anchored the chase brilliantly despite some good bowling from the Pakistan pacers.

The two teams will now face off again at the Dubai International Stadium on Sunday in the final of the Asia Cup.

Hasan Ali Cricket
Get the latest updates on Fifa Worldcup 2022 and check out  Fifa World Cup Schedule, Stats and Live Cricket Score. Like us on Facebook or follow us on Twitter for more sports updates. You can also download the NDTV Cricket app for Android or iOS.