Sunday was a sporting bonanza as India took on Pakistan in the Asia Cup and at the same time, Premier League giants Manchester United were facing off against current table-toppers Arsenal

Sunday was a sporting bonanza as India took on Pakistan in the Asia Cup and at the same time, Premier League giants Manchester United were facing off against current table-toppers Arsenal. Bollywood star Ranveer Singh, like many fans, could not decide which of the two mouthwatering clashes to watch, and ended up following both. How? Well, multiple screens of course, and some "bhaari multi-tasking". Ranveer took to Twitter to share a picture where the India vs Pakistan match could be seen running on TV, and his favourite team Arsenal's match on a tablet in front of the television.

"BHAARI MULTI-TASKING," he captioned the picture, along with a laughing emoji. 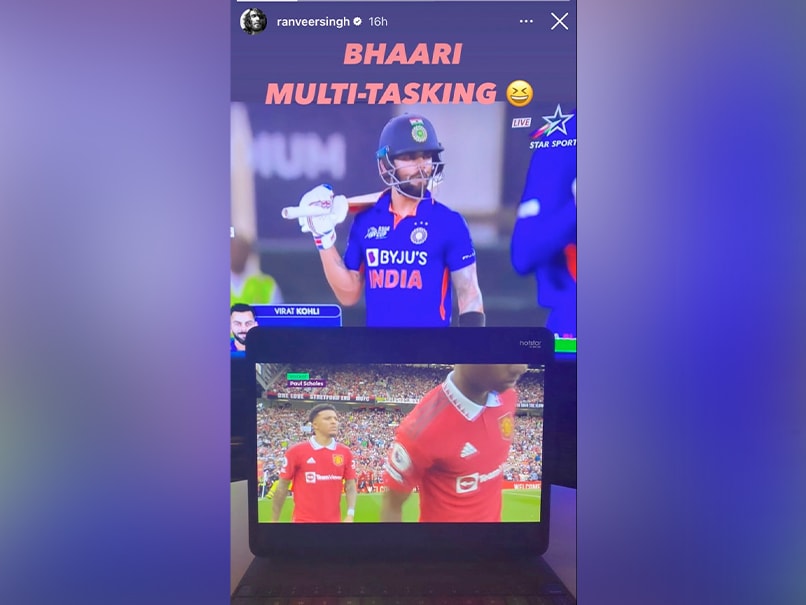 The night probably ended up in disappointment for Ranveer, though, as India went down to Pakistan in a thriller in Dubai, while Manchester United thumped Arsenal 3-1 at Old Trafford.

A brilliant knock of 60 off 44 deliveries from Virat Kohli, coupled with an aggressive start by openers Rohit Sharma and KL Rahul, powered India to 181/7 in the Asia Cup Super 4 clash.

However, it was not enough as Mohammad Rizwan (71 off 51) and Mohammad Nawaz (42 off 20) set up Pakistan's chase perfectly and they ended up winning with a delivery to spare.

In Manchester, it was a debut goal from Antony that gave United the lead over Arsenal. The Gunners came back through a Bukayo Saka strike, but Marcus Rashford hit a brace to give the Red Devils their fourth win on the trot.

The consolation for Ranveer will be that Arsenal still sit atop the Premier League table and India can still make the Asia Cup.

Manchester United Marcus Rashford Antony English Premier League
Get the latest updates on Fifa Worldcup 2022 and check out  Fifa World Cup Schedule, Stats and Live Cricket Score. Like us on Facebook or follow us on Twitter for more sports updates. You can also download the NDTV Cricket app for Android or iOS.