IND vs HKG: Hong Kong batter Kinchit Shah made sure it was a night to remember as he popped the question to his girlfriend in the stands after the match against India. 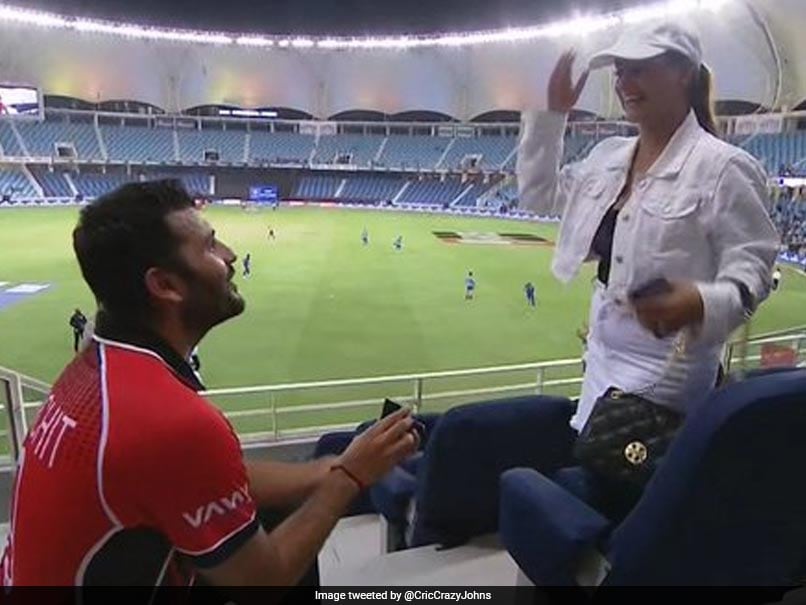 Hong Kong put in a spirited display even as they went down by 40 runs to India in the Asia Cup on Wednesday. And while the result may have been a disappointing one, the night became one to remember for Hong Kong batter Kinchit Shah. After the match, Kinchit went up to the stands at the Dubai International Stadium to surprise his girlfriend and then got down on one knee to pop the question. She looked completely taken aback by the proposal and was heard repeatedly saying "I can't believe this" as Kinchit waited patiently, a large grin on his face.

Eventually, she went on to say "Of course" and he went on to put the ring on her before the happy couple embraced each other.

Watch: Kinchit Shah proposes to girlfriend in the stands at Asia Cup and she says yes

She said YES!
A heartwarming moment where Hong Kong's @shah_kinchit95 proposed to his SO after playing a big match against India
A huge congratulations to the happy couple. We wish you all the joy and happiness in your new life together #AsiaCup2022 #GetReadyForEpic pic.twitter.com/CFypYMaPxj

The video and pictures of his proposal went viral on social media, with fans lauding the heartwarming moment.

In the match, a brilliant 28-ball 62* from Suryakumar Yadav and an unbeaten 44-ball 59 from Kohli powered India to a total of 192/2 after Hong Kong put them in to bat.

After a slow start, India looked set for a sub-par total, but Suryakumar went berserk at the death to change the complexion of the innings. He hit six fours and six sixes - four of which came in the final over.

Hong Kong showed intent with the bat in the Powerplay, but once India's spinners came on, they faded away.

They eventually finished with 152/5.

Hong Kong still have slim hopes of making it to the Super-4 stage of the Asia Cup but they need to beat Pakistan in the final Group A encounter to make that happen.

Hong Kong Kinchit Shah Cricket
Get the latest updates on Fifa Worldcup 2022 and check out  Fifa World Cup Schedule, Stats and Live Cricket Score. Like us on Facebook or follow us on Twitter for more sports updates. You can also download the NDTV Cricket app for Android or iOS.