Jasprit Bumrah finished as the second highest wicket-taker in the 2018 Asia Cup. 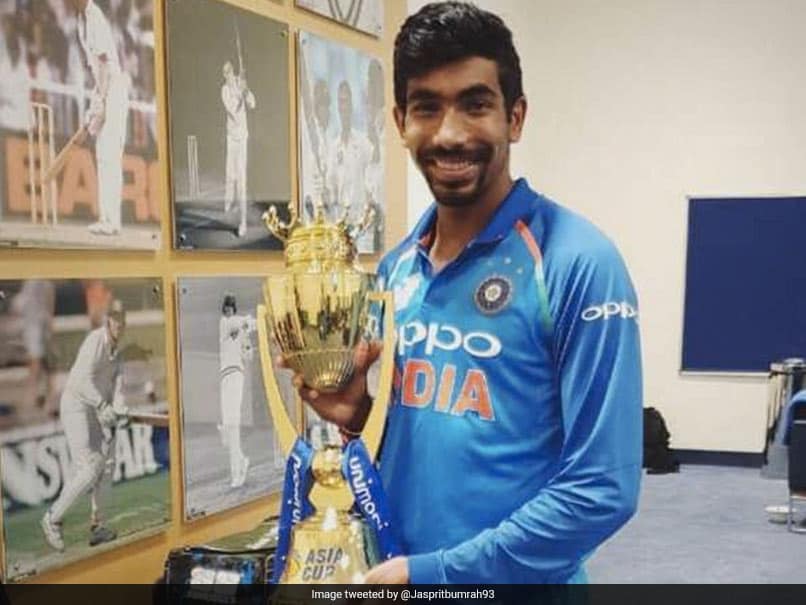 Indian pacer Jasprit Bumrah gave a befitting reply to his trolls after lifting the 2018 Asia Cup after a nervy 3-wicket win over Bangladesh in Dubai. Jasprit Bumrah posted a sarcastic message for his naysayers with a picture of the Asia Cup trophy on his official Twitter account. "Some people love to use their creativity on the signboards. Hope this one fits there as well!! #Champions #AsiaCup2018 #lionalwaysroars", he captioned on his social media account.

Some people love to use their creativity on the sign boards. Hope this one fits there as well!!#Champions#AsiaCup2018 #lionalwaysroars pic.twitter.com/VWiJidwmaA

The post appeared to be a veiled attack in response to a post tweeted by Jaipur Police, who had used his infamous no-ball image on a signboard for a road safety message in 2017. Taking a dig at his no-ball, the advertisement showed him overstepping along with the caption, 'Don't cross the line. You know it can be costly.' Bumrah was evidently left unimpressed with the unwarranted jibe and hence tweeted the same.

@traffic_jpr well done Jaipur traffic police this shows how much respect you get after giving your best for the country. pic.twitter.com/y0PU6v9uEc

@traffic_jpr But don't worry I won't make fun of the mistakes which you guys make at your work .because I believe humans can make mistakes

The Jaipur Traffic Police did apologise for the tweet but the damage was already done.

Dear @jaspritbumrah93, our intent was not to hurt your sentiments or the sentiments of millions of cricket fans.

.@jaspritbumrah93, we only intended to create more awareness about traffic rules.

.@jaspritbumrah93, you are a youth icon & an inspiration for all of us.

Bumrah's front foot no-ball had given Pakistan opener Fakhar Zaman an early life in the final of the ICC Champions Trophy 2017 which proved costly. Zaman went onto to score a brilliant 114 helping Pakistan post 338/4 wickets after 50 overs. In reply, India were bundled out by Pakistan for 158 runs, winning the final by 180 runs.

However, Bumrah made amends in the next major tournament which was the recently-concluded Asia Cup. He finished with 8 wickets (4 matches) becoming the second highest wicket-taker.

Jasprit Bumrah Cricket
Get the latest updates on ICC Women's Cricket World Cup 2022 and IPL 2022, check out the Schedule , Live Score and IPL Points Table. Like us on Facebook or follow us on Twitter for more sports updates. You can also download the NDTV Cricket app for Android or iOS.