While Shoaib Malik was fielding on the boundary, Indian fans took the opportunity and called out to him. 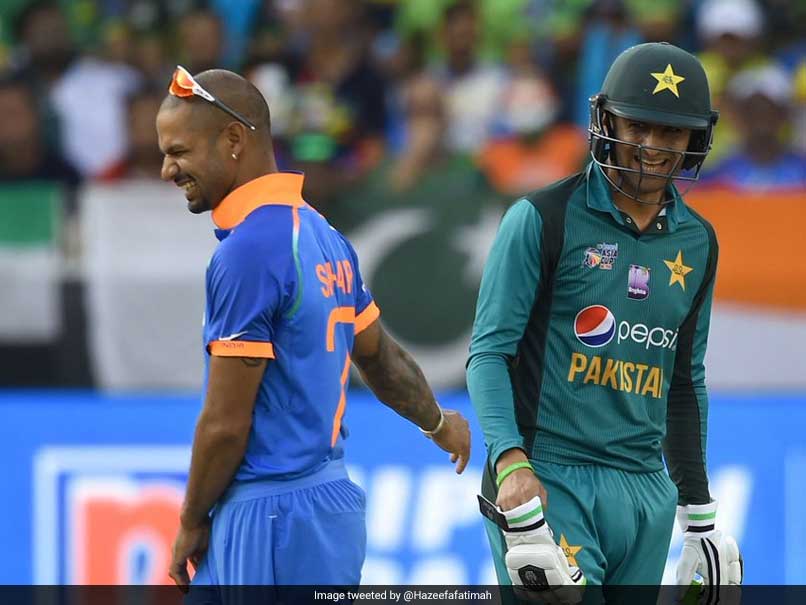 India thrashed Pakistan by nine wickets in the Super Four clash of the Asia Cup 2018 at the Dubai Interantional Cricket Stadium on Sunday to all but assure themselves of a place in the final. Shoaib Malik top scored for Pakistan with a gritty 78 off 90 ball but he was completely overshadowed by the batting prowess of Rohit Sharma and Shikhar Dhawan, both of whom hit centuries. Despite being a repeated thorn in India's flesh, Shoaib Malik, who is married to Indian tennis star Sania Mirza, received some love from the Indian fans in the stadium during the match.

While Shoaib Malik was fielding on the boundary, Indian fans took the opportunity and called out to him, saying, "jiju look here once". Much to the delight of the fans, the Pakistan all-rounder turned around and waved at them.

Malik, who had impressed in the group stage match against India by scoring 43, was again in the thick of the action on Sunday as Pakistan skipper Sarfraz Ahmed won the toss and elected to bat.

Pakistan openers struggled to get going with Jasprit Bumrah and Bhuvneshwar Kumar keeping them under wraps.

Yuzvendra Chahal struck in the seventh over to remove Imam-ul-Haq while Kuldeep Yadav removed Fakhar Zaman. Babar Azam was run out for nine as Pakistan fell to 58 for three in 15.5 overs.

Shoaib Malik and captain Sarfraz then added 107 runs for the fourth wicket to revive the Pakistani innings. However, once the two departed, Pakistan once again fell in a rut and were restricted to 237 for seven.

India cantered in the chase thanks to centuries from skipper Rohit Sharma (111 not out) and Shikhar Dhawan (114). India reached the target in just 39.3 overs for their second win over Pakistan in the tournament.

India next take on Afghanistan on Tuesday while Pakistan face Bangladesh on Wednesday.

Shikhar Dhawan Asia Cup 2018 India vs Pakistan, Super Four - Match 3 Cricket
Get the latest updates on ICC T20 Worldcup 2022, check out the Schedule and Live Score. Like us on Facebook or follow us on Twitter for more sports updates. You can also download the NDTV Cricket app for Android or iOS.