Bhuvneshwar Kumar was named player of the match in India's win over Pakistan. 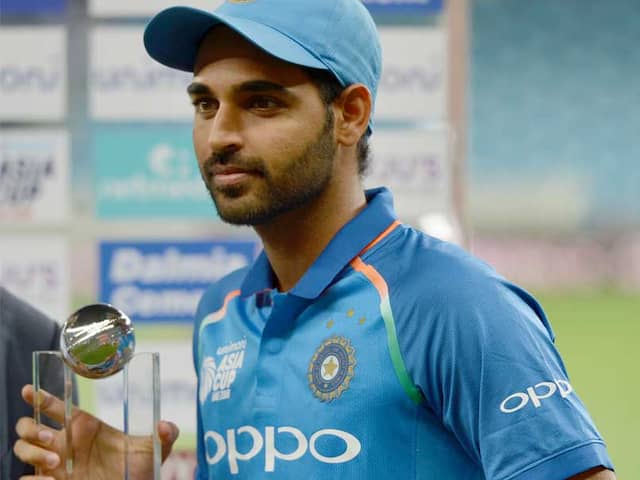 India comfortably beat Pakistan by eight wickets in their Asia Cup 2018 match on Wednesday night. Pacer Bhuvneshwar Kumar was adjudged the player of the match for his disciplined bowling display (3/15) against the arch-rivals. Speaking to team-mate Jasprit Bumrah after the match in a video posted by the Board of Control for Cricket in India (BCCI) Twitter handle, Bhuvneshwar Kumar praised his team's bowling unit for their performance against Pakistan. "Good thing is that the bowling unit stepped up to register a comprehensive win," he said.

Captain Rohit Sharma led from the front with his fine half-century. Rohit scored 52 runs in 39 balls hitting six fours and three sixes. He was ably supported by Shikhar Dhawan (46) to lay the foundation for the other Indian batsmen.

Asked about skipper Rohit's fiery knock, Bhuvneshwar said, "He appeared to be in the T20 zone. Shikhar Dhawan also batted well. Both openers gave us a solid start."

Bhuvneshwar also shed light on India and Pakistan's intense rivalry. "Pressure remains the same for all the matches but India-Pakistan game is always a high-profile game," he said.

India take on Bangladesh in their first Super Four match on Friday while Pakistan will play Afghanistan the same day in the second Super Four game.

The final of the Asia Cup 2018 will be played in Dubai on September 28.

Bhuvneshwar Kumar Asia Cup 2018 India vs Pakistan, Match 5 Cricket
Get the latest Cricket news, check out the India cricket schedule, Cricket live score . Like us on Facebook or follow us on Twitter for more sports updates. You can also download the NDTV Cricket app for Android or iOS.