Mushfiqur scored a career-best 144 off 150 balls with 11 boundaries and four sixes for his sixth ODI hundred as Bangladesh. 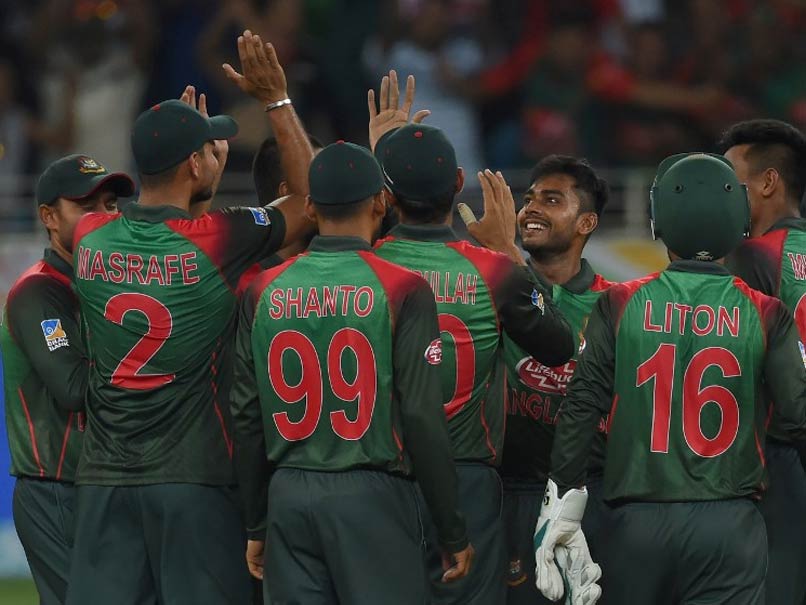 Mushfiqur Rahim'ssuperb hundred complemented by a collective effort from the bowlers saw Bangladesh thrash Sri Lanka by 137 runs despite Lasith Malinga's brilliant international comeback in the Asia Cup opener at the Dubai International Cricket Stadium on Saturday. Mushfiqur scored a career-best 144 off 150 balls with 11 boundaries and four sixes for his sixth ODI hundred as Bangladesh scored 261 all out in 49.3 overs after opting to bat. Save the 131-run stand with Mohammed Mithun (63) for the third wicket, the former skipper didn't get any assistance from other Bangladesh batsmen as the wily Malinga showed that he is still a force to reckon with.

Malinga, whose last ODI was against India in a home series in September 2017, took 4/23 on his return.

Chasing 262 for a win, Sri Lanka suffered a batting collapse with none of their batsmen showing intent to stay at the crease as they were all out for 124 in 35.2 overs.

This was Sri Lanka's lowest ODI total versus Bangladesh. There was no rotation of strike and no partnership worth the name. The highest partnership for Sri Lanka was the 27 for the eighth wicket.

Sri Lanka showed the intent of a strong start as opener Upul Tharanga (27) struck a six and three fours in the first two overs but he and his partner Kusal Mendis (0) perished in quick succession.

Mendis was the first to go in the final delivery of the second over bowled by Mustafizur Rahman while Tharanga departed the next over off Mashrafe Mortaza to leave Sri Lanka at 28 for 2 in the third over.

Sri Lanka needed a top order batsman to stick around but one down Dhananjaya de Silva (0) was not able to do that as he was trapped LBW off Mortaza as the ball nipped back in from off-stump. Sri Lanka were 32 for 3 then.

The next four overs gave just four runs as Sri Lanka went into a shell but Bangladesh still found a way out to get a wicket as Mehidy Hasan sent Kusal Perera (11) back in the dressing room.

Perera went forward to defend but the ball beat the bat and struck the pad for the umpire to raise his finger.

Sri Lanka were in deep trouble then as they were 42 for 4 after the first powerplay 10 overs.

Sri Lanka survived for another six overs with captain Angelo Mathews (16) and Dasun Shanaka (7) trying to settle down and stitch a partnership.

But just as it seems they were on course for that, Sri Lanka put themselves in further trouble with Mathews making an error of judgement. He first called and then sent Shanaka back after working the ball to the leg side off a Shakib al-Hasan delivery. But Shanaka had already made more than half the pitch and not in a position to return when Mehidy Hasan broke down the stumps.

Mathews himself did not survive for long as he perished in the next over LBW off a delivery from Rubel Hossain to virtually end the run chase.

All the six Bangladesh bowlers got at least a wicket. Mashrafe Mortaza, Mustafizur Rahman and Mehidy Hasan grabbed two wickets each while Shakib Al-Hasan, Rubal Hossain and Mosaddek Hossain took one each.

Earlier, Mushfiqur scored the bulk of the Bangladesh runs as he and Mithun took their side out of the woods after being reduced to one run for two wickets and opener Tamim Iqbal returning to the pavillion after an injury only to come back at the fag end of the innings. Tamim's heroic act will be remembered as he came out to bat despite having retired hurt with a fractured wrist. He allowed Mushfiqur to have one final blast during the slog overs.

Once Malinga and off-spinner Dhananjaya de Silva (2/38) reduced Bangladesh to 203/8, Mushfiqur shielded no 11 Mustafizur Rahaman (10) during the 26-run stand.

Once Mustafizur was out, Tamim removed his hand-cast and came out in order to allow his partner to play the final three overs. The Tamim-Mushfiqur pair added an invaluable 32 runs in 2.4 overs and it could well be crucial in the final context of the match.

However, Malinga's superb effort was story of the initial part of the match. Coming back from semi-retirement with a slight paunch and a shorter run-up, Malinga showed his mastery as he bowled four different deliveries to get his scalps.

Liton Das (0) nicked an outswinger in the slip cordon, Shakib Al Hasan (0) was castled by his signature inswinging yorker, Mithun skied a slower delivery while Mosddek Hossain was done in by a slow bouncer.

Even Mushfiqur failed to score runs off the slinger who bowled as many as 44 dot balls and didn't concede a single boundary in his 10 overs.

However, the seasoned Mushfiqur got runs off spinners, scoring on both sides of the wicket. He used his feet well against left-arm spinner Malmiga Aponso and off-spinners Dilruwan Perera and De Silva.

However, as wickets fell at the other end, it became difficult for Mushfiqur, who considerably slowed down in his 90's. His hundred came with a glide off Suranga Lakmal off 123 balls.

But once Mustafizur was out and injured Tamim came in for support, Mushfiqur just cut loose getting 32 runs in 2.4 overs before he was the last batsman to be dismissed.

Tamim, however, will not take any further part in the tournament as he will be out with a broken wrist.

Sri Lanka Cricket Team Asia Cup 2018 Bangladesh vs Sri Lanka, Match 1 Cricket
Get the latest updates on IPL 2021, check out the IPL 2021 Schedule and Indian Premier League Live Score . Like us on Facebook or follow us on Twitter for more sports updates. You can also download the NDTV Cricket app for Android or iOS.