Steve Smith's remorseless run-glut continued as he made 82 - his lowest score this series - in Australia's second innings 186/6 declared. 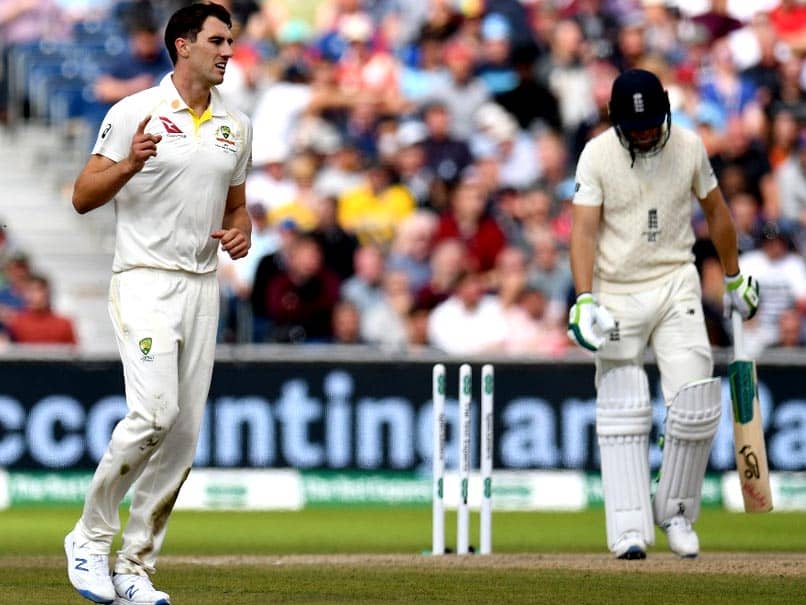 Pat Cummins took two wickets in two balls, including England captain Joe Root for a golden duck, to leave Australia on the brink of retaining the Ashes at Old Trafford on Saturday. England were 18/2 in their second innings at stumps on the fourth day of the fourth Test, still needing a further 365 runs on Sunday's last day to reach a target of 383. By contrast, Australia require eight wickets to seal a win that would see the holders keep the Ashes at 2-1 up with one to play in a five-Test series.

The most England have made in the fourth innings to win a Test the 362/9 they posted in their series-levelling success last time out at Headingley, where Ben Stokes's stunning 135 not out and the resistance of No 11 Jack Leach secured a remarkable one-wicket victory.

Earlier, Steve Smith's remorseless run-glut continued as he made 82 -- his lowest score this series -- in Australia's second innings 186/6 declared.

Australia captain Tim Paine's decision left England with an awkward 30 minutes in which to bat.

Rory Burns and Root had shared a partnership of 141 while making 81 and 71 respectively in England's first-innings 301.

But on Saturday they were both out for nought in the first over of England's chase.

Left-handed opener Burns, looking to turn Cummins's third ball legside, got a leading edge and was caught at short cover by Travis Head.

Next ball a brilliant delivery that nipped away off the seam and clipped the top of off stump saw Root bowled by an elated Cummins for his third nought of the series and second golden duck.

Cummins was on a hat-trick, with the struggling Jason Roy next in but the World Cup winner responded to the crisis with a solid forward defensive shot and he got through to stumps on eight not out, with Joe Denly unbeaten on 10.

Earlier, Smith's ninth successive Ashes fifty, extending his own record, followed his superb 211 in the first innings of his comeback Test after he missed the match at Headingley with a concussion suffered when hit by a 92mph Jofra Archer bouncer at Lord's.

In what is his first Test series since completing a 12-month ball-tampering ban, former Australia captain Smith has now scored 671 runs, including three hundreds, at an average of 134.2

He was on course to become the first batsman in Ashes history, and only the eighth in any Test, to score a double hundred and hundred in the same match when he lofted left-arm spinner Leach with Stokes, running round from long-off, holding a safe catch to end a 92-ball innings featuring 11 fours.

Stuart Broad and Archer had reduced Australia to 44-4 before tea after England narrowly avoided following-on in reply to the tourists' 497-8 declared.

But Smith, fidgeting across the crease in trademark fashion, held firm.

He did give a chance on 48 when he reverse-swept Leach, with Stokes, anticipating the shot and moving quickly across from slip, failing to hold what would have been a sensational catch.

The 30-year-old Smith toyed with England's bowlers on a sunny afternoon, pulling Broad for an extravagant four in front of mid-on.

While Smith has enjoyed an Ashes run-spree, David Warner -- also returning from a 12-month ball-tampering ban  -- has become something of a 'bunny' for Broad.

Saturday saw left-handed opener Warner out for his third straight Test duck when Broad, the successful bowler on each occasion, had him lbw.

It was the sixth time Warner, like Smith had fallen to Broad this Ashes and meant he had completed 'a pair' this match after a nought in the first innings.

World Cup-winner Archer, in only his third Test, had been down on pace during Australia's first innings.

But the express quick was back over the 90 mph mark on Saturday during a return of 3-45 in 14 overs.

Steven Smith The Ashes 2019 Cricket England vs Australia, 4th Test
Get the latest updates on India vs England Series, India vs England , live score and IPL 2021 Auction . Like us on Facebook or follow us on Twitter for more sports updates. You can also download the NDTV Cricket app for Android or iOS.