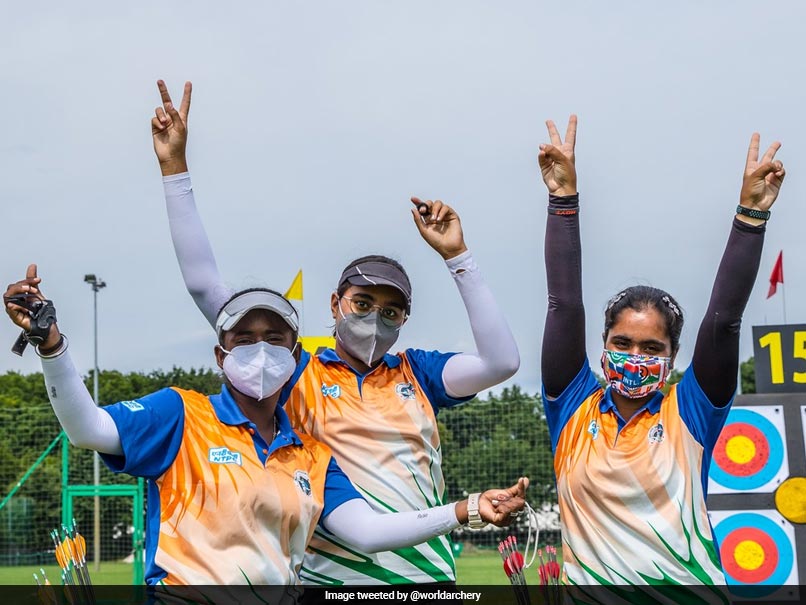 The Indian u-18 women's compound archery team pose during qualification, at Poland.© Twitter

Indian compound archery women's and the mixed team smashed two junior (U-18) world records during the qualification stages of the ongoing World Archery Youth Championship in Wroclaw on Tuesday. Priya Gurjar, who shot 696 for individual pole, Parneet Kaur and Ridhu Senthilkumar combined for 2067/2160 points and smashed the standing women's team world record by 22 points. The old record was held by the USA at 2045/2160 points. "I'm really happy but I can shoot even more than I did today," World Archery quoted Gurjar.

The Indian under-18 compound women's team has cruised past the #worldrecord by 22 points, shooting 2067/2160 during qualifying at the world youth championships in Poland!#archery pic.twitter.com/gBs3NkNA7y

"My goal is to win the world champion title and I will do my best to do that."

India now looks a strong favourite in the category with Kaur picking up the third and Senthilkumar the fourth individual seeds, too.

Sawyer Sullivan finished one point off his own world record of 714 points to lead the USA under-18 compound men's team to a new team world record.

Great Britain's James Woodgate (678) and Japan's Sonoda Waka, the under-18 silver medallist from two years ago, took the top seeds in the under-21 recurve events during the morning qualifying session. Woodgate competed at the Olympics in Tokyo just last month.

Russia's recurve men, Japan's recurve women and Spain's mixed pair took the top seeds in the under-21 team events. The competition continues on Tuesday afternoon in Wroclaw with the second qualifying session.