During the 48th over of Sri Lankan innings, every one, including fielders,batsmen and umpires, were forced to lie down on the ground after a bee attack. 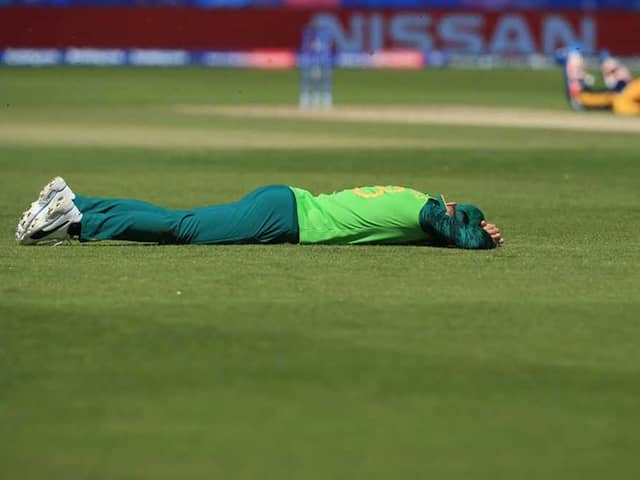 Bee attack forced players and umpires to lie down on the ground.© AFP

World Cup 2019 has seen several interruptions and some washouts, all due to rain, but on Friday, the match between Sri Lanka and South Africa was halted under bright sunlight, leaving people wondering about the reason. During the 48th over of Sri Lanka's innings, every one, including fielders, batsmen and umpires were forced to lie down on the ground because a swarm of bees invaded the ground. Although the play was stopped for a brief while, it was more than enough to become a talking point on social media, with many posting pictures and videos related to the incident.

Down but not out! A swamp of bees at Durham hold up play. #SLvsRSA #CWC19 pic.twitter.com/4wkI7KP1sH

This was not a one-off experience for both Sri Lanka and South Africa players as they faced a similar incident in 2017 during a One Day international (ODI) at the Wanderers in South Africa.

While the delay was only for a few minutes on Friday, the insects had halted the play for more than an hour at the Wanderers.

When last did you see this?

The bees are back again in a South Africa v Sri Lanka cricket match, this time at Chester-le-Street#CWC19 #ItsMoreThanCricket #SLvSA pic.twitter.com/Hr6K9b6f0x

Sri Lanka, after being put in to bat by South Africa skipper Faf du Plessis, were struggling at 194/8 when the incident happened. They could not even play their full quota of overs and finished their innings at 203-all out in 49.3 overs.

Chris Morris and Dwaine Pretorius were the pick of the bowlers for Sri Lanka as they claimed three wickets each.

South Africa thumped Sri Lanka by nine wickets at Chester-le-Street, dealing a huge blow to the Asian side's hopes of reaching the semi-finals.

South Africa, who were already out of the race for the final four, reached their target of 204 in the 38th over.

Riverside Ground, Chester-le-Street
Get the latest Cricket news, check out the India cricket schedule, Cricket live score . Like us on Facebook or follow us on Twitter for more sports updates. You can also download the NDTV Cricket app for Android or iOS.