A target of 298 proved just beyond England, without four first-choice players including captain Eoin Morgan and fellow batsman Joe Root, as the World Cup hosts and favourites were dismissed for 285 with three balls left. 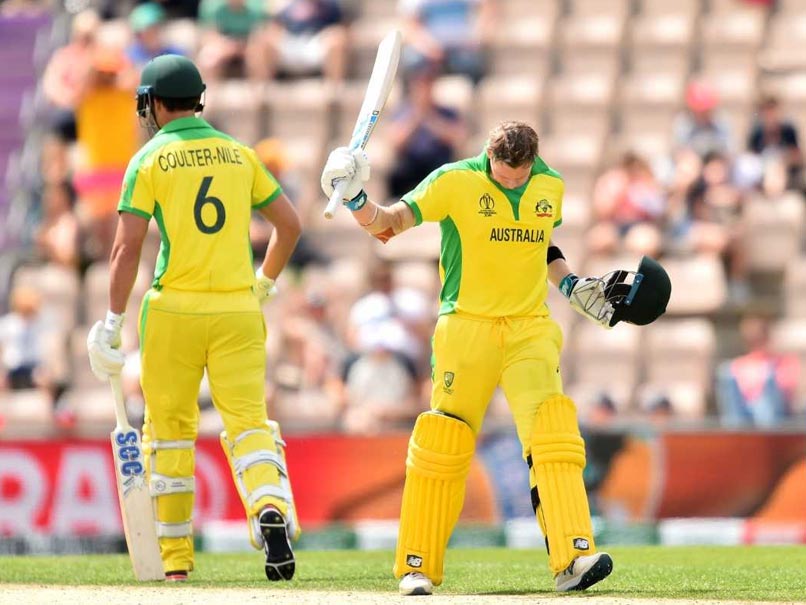 Steve Smith ignored the jeers of the crowd to mark his first match against England since a ball-tampering ban with a century that set up Australia's 12-run win in a World Cup warm-up clash at Southampton on Saturday. Smith's 116 was the centrepiece of reigning world champions Australia's 297 for nine.

A target of 298 proved just beyond England, without four first-choice players including captain Eoin Morganand fellow batsman Joe Root, as the World Cup 2019 hosts and favourites were dismissed for 285 with three balls left.

Smith and David Warner only returned to international duty earlier this month after they both completed year-long suspensions for their roles in a ball-tampering scandal in South Africa.

The disgraced duo's first match in England this tour was a hastily arranged, unofficial warm-up match against the West Indies on the nursery ground at Southampton on Wednesday.

But that fixture was played in front of fewer than 30 spectators whereas there were several thousand in the main arena on Saturday for the first of several Anglo-Australian clashes in a season featuring both the World Cup and a five-Test Ashes series.

"I'm pretty chilled, everyone's entitled to their opinion," Smith told Sky Sports during the innings break when asked about the crowd's taunts.

"I'm just happy to be back playing. Fortunately, I was able to contribute today and hopefully I can take this form into the World Cup."

Warner was booed first by spectators on Saturday when he walked out to open the innings with captain Aaron Finch after Australia lost the toss.

And when the left-hander arrived at the crease, one fan shouted: "Get off Warner you cheat."

Warner's dismissal for 43, caught in the deep by Jonny Bairstow off Liam Plunkett, was greeted by immediate cheers from England fans.

But there were more boos as he returned to the pavilion to be replaced by Smith, coming in with Australia 82 for two.

The BBC reported there were a few chants of "cheat, cheat, cheat", although a lone Australia fan shouted "Get 'em Stevie!".

There was, however, the customary round of applause from the crowd for a batsman reaching his fifty when Smith got to the landmark.

Long a thorn in England's side, Smith went to 99 with a superb carved six over third man off Ben Stokes.

The next ball delivery saw Smith complete a 94-ball hundred, including eight fours, prompting yet more boos as well as clapping to acknowledge his century before he was dismissed off the penultimate ball of the innings.

But both batsmen got out when well set.

Buttler, leading England in the absence of the injured Morgan, hit 24 off one over from fast bowler Nathan Coulter-Nile.

A fierce cut for four was followed by an 84-metre straight six before Buttler cut another boundary.

He didn't score off the fourth ball of the 27th over but made amends off the last two, with a huge pulled six off the fifth delivery followed by an edged four past wicket-keeper Alex Carey.

But Coulter-Nile had his revenge when Buttler chipped him to short mid-wicket.

Worryingly for England, fast bowler Mark Wood could only manage 3.1 overs before going off with what a team spokesman said was "left foot discomfort".

England do, however, expect to have Morgan back from a finger injury when they open the World Cup against South Africa at the Oval on Thursday.

The Rose Bowl, Southampton World Cup 2019 Cricket
Get the latest updates on IPL Auction 2023 and check out  IPL 2023 and Live Cricket Score. Like us on Facebook or follow us on Twitter for more sports updates. You can also download the NDTV Cricket app for Android or iOS.