Ricky Ponting feels Steve Smith and David Warner have to deal with crowd on return after the infamous scandal. 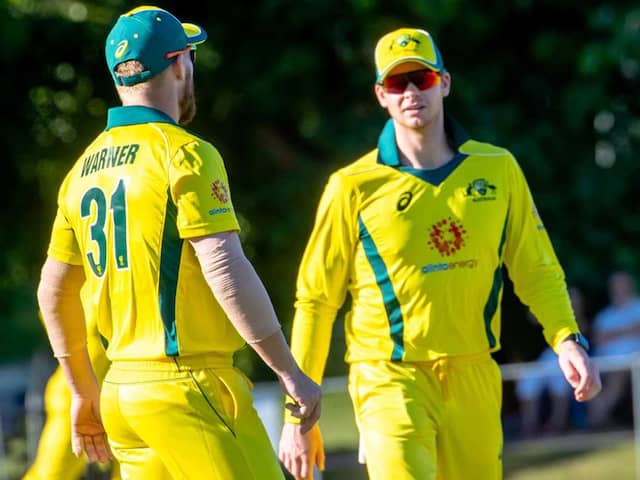 Steve Smith and David Warner last played a One-Day International for Australia in January 2018 as they were banned from international cricket for one year following the ball-tampering scandal in South Africa in March last year. Ahead of their international comeback in World Cup 2019, starting on May 30 in the UK, Australia's assistant coach Ricky Ponting feels they'll have to deal with crowd on return after the infamous scandal. However, Ricky Ponting added that two "big boys" have seen it before and will be fine.

"They're playing well. Smith still thinks he's not probably 100 per cent fit just yet, but he's not far away. Warner's been the dominant batsman in the IPL," Ponting told The Telegraph.

"They're class players. They'll have their fair share of issues to deal with from the crowds and stuff when they get over there. They're big boys. They've been there and seen it all before. I'm sure they'll be fine," he added.

Ponting added Australia's chances of defending the World Cup crown will depend on how well they play spin and use it.

Remarking that it's been their Achilles heel in the last 12-18 months, Ponting said, "Adam Zampa is bowling well now, Nathan Lyon's obviously in the squad and Glenn Maxwell's done a good job with the ball whenever he's played."

The former skipper also backed the Australian middle order, saying they were better players of the turning ball now than they were 12 months ago.

"Some of our middle order are probably slightly better players of spin now than they were 12-18 months ago. With David Warner there and Steve Smith coming back, the middle order looks a lot better against spin bowling than it probably was," he said.

Ponting, who will be assisting head coach Justin Langer at the World Cup, said Aaron Finch's team could recall past victories for inspiration and knowledge to avoid peaking too early.

"I guess that's probably one of the reasons they've got me involved -- having been around some successful World Cup campaigns," Ponting said.

Stating that tournament play is a different thing, and not just another five- or three-game series, he said it was all about a pretty long tournament of one-day cricket.

"You've got to find a way to build your way into the tournament and make sure you're playing your best cricket at the back alley. That's one thing Australians have always done. They've tended to play their best cricket in the World Cups and when it has mattered in the big games," the former captain said.

He said, Australia had got a proud history "that'll be something that will be spoken about within the group." But it was also a chance for current players to make a name for themselves on the world stage and a chance for them all to become World Cup winners as well, he added.

Steven Smith Cricket World Cup 2019
Get the latest Cricket news, check out the India cricket schedule, Cricket live score . Like us on Facebook or follow us on Twitter for more sports updates. You can also download the NDTV Cricket app for Android or iOS.