World Cup 2019: Shikhar Dhawan Steps Up His Recovery Efforts, Sweats Out In The Gym

Shikhar Dhawan posted a video of him sweating it out in the gym with a plastered thumb. 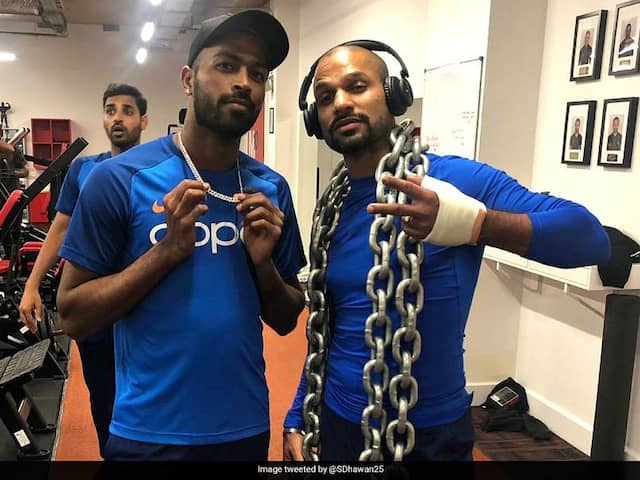 Shikhar Dhawan was seen doing leg exercises as India get ready to take on Pakistan on Sunday.© Twitter

Virat Kohli on Thursday had said that he hopes Shikhar Dhawan's injury will heal quickly and he will be available for Team India's league matches in the latter part of World Cup 2019. Looks like the left-hander has taken inspiration from Kohli's comments and has stepped up his recovery efforts so that he can get back on the field as quickly as possible. Dhawan posted a video of him sweating it out in the gym with a plastered thumb. Along with the video, the 33-year old shared a message thanking his fans for their best wishes.

"You can make these situations your nightmare or use it (as) an opportunity to bounce back. Thank you for all the recovery messages from everyone," Dhawan wrote alongside the video.

You can make these situations your nightmare or use it an opportunity to bounce back.
Thank you for all the recovery messages from everyone. pic.twitter.com/mo86BMQdDA

Dhawan was seen doing leg exercises as India get ready to take on Pakistan in a marquee clash in Manchester on Sunday.

Dhawan suffered the injury after being hit by a Pat Cummins delivery during his 109-ball 117 knock against Australia.

Rishabh Pant, who was initially ignored for Dinesh Karthik when the 15-member squad was picked, has been named as standby and is expected to fly in to England as cover.

"Shikhar will be in a plaster for a couple of weeks, we'll assess and see. Hopefully he'll be available for the later half and the semi-finals. He's motivated, we wanted to keep him back," Kohli had said after their New Zealand tie was called off on Thursday due to rain and a wet outfield.

Dhawan was back to his sublime best against Australia when he struck his 17th ODI hundred, a crisp 117 off 109 balls.

Dhawan will be monitored by the team management for the next 10 to 12 days before a call is taken on the opener.

"We will take at least 10-12 days to take a call on Shikhar's condition. We don't want to rule out a precious player like him," India's assistant coach Sanjay Bangar had said on the eve of India's clash against the Kiwis.