Sheldon Cottrell made good ground before catching the ball one-handed, throwing it up in the air, regaining his position inside the boundary, and completing the dismissal. 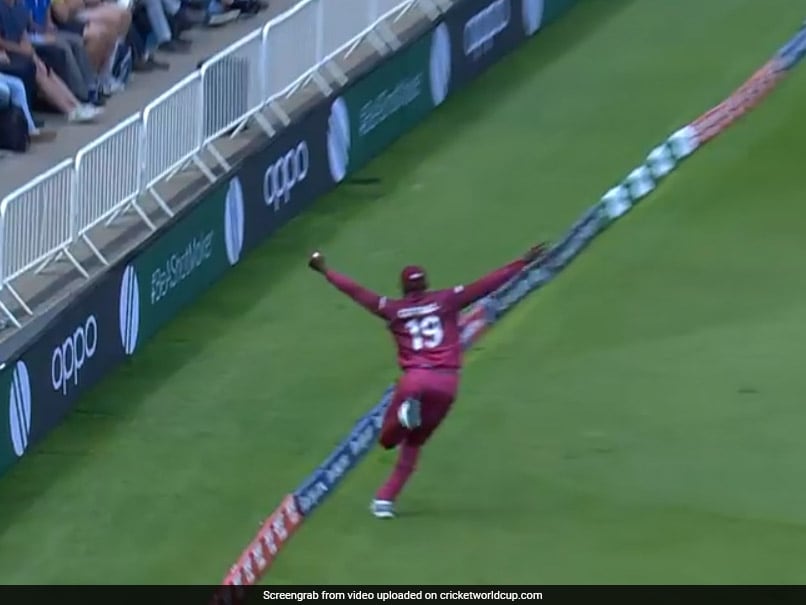 Sheldon Cottrell pulled off an incredible catch to dismiss Steve Smith during the World Cup 2019 clash between Australia and West Indies at Trent Bridge on Thursday. Batting on 73, Steve Smith flicked an Oshane Thomas delivery towards the leg-side boundary and it looked like the ball was going for a maximum. However, Cottrell, stationed at fine-leg, had other plans. Cottrell made good ground before catching the ball one-handed, throwing it up in the air, regaining his position inside the boundary, and completing the dismissal.

Sheldon Cottrell, we salute you! Is this the best catch of #CWC19 so far?https://t.co/yZopBE5vAh

Nathan Coulter-Nile hit 92 as Australia staged a remarkable rally against the West Indies.

Australia were in dire straits at 38 for four following an aggressive start by the West Indies' quicks.

But they finished on 288 all out after former captain Steve Smith (73), who put on 102 for the seventh wicket with Coulter-Nile, began the repair job.

"It was the sort of wicket where you have to take your time and get used to the bounce. Some balls seemed to rear up and the short balls felt really quick. I don't know if it's the pitch or their bowlers," said Coulter-Nile.

The West Indies had bounced out Pakistan for just 105 when winning their tournament opener at Nottinghamshire's headquarters last week and adopted similar tactics after captain Jason Holder won the toss on a sunny day.

Steve Smith World Cup 2019 Cricket Australia vs West Indies, Match 10
Get the latest updates on ICC T20 Worldcup 2022 and CWG 2022 check out the Schedule, Live Score and Medals Tally. Like us on Facebook or follow us on Twitter for more sports updates. You can also download the NDTV Cricket app for Android or iOS.