Steve Smith made 116 in his first appearance against England since a year-long ban for ball-tampering. 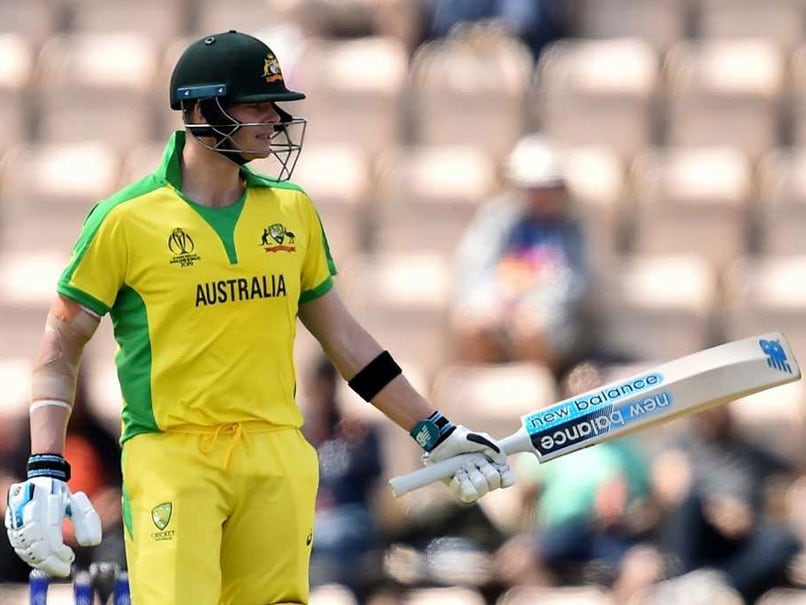 Steve Smith continued his impressive build-up to the World Cup with a match-winning century.© AFP

Steve Smith and David Warner were given a hostile reception by the Ageas Bowl crowd as they came out to bat in their World Cup warm-up match against England on Saturday. However, unfazed, Steve Smith continued his impressive build-up to the World Cup with a match-winning century. Smith made 116 in his first appearance against England since a year-long ban for ball-tampering as Australia beat the World Cup hosts and favourites by 12 runs. There were jeers, and some cheers, for both Smith and opening batsman David Warner, who also served a 12-month suspension for his role in the scandal during a Test against South Africa in Cape Town, from Saturday's crowd of 11,500 at Hampshire's headquarters.

"Everyone's entitled to their opinion and how they want to treat people," Smith told reporters after a 102-ball innings featuring eight fours and three sixes.

"It's water off a duck's back and it doesn't bother me. I try to black it out.

"They call it 'white noise'. When I'm out in the middle I don't pay attention to the crowd or what they're saying," he added after top-scoring in a total of 297 for nine.

Yep that's someone dressed as a cricket ball with a sandpaper hat and holding sandpaper as well pic.twitter.com/UsiL0tsM56

Former Australia captain Smith said both he and Warner, his vice-captain in Cape Town, had been welcomed back warmly by their colleagues.

"It's like we never left in a way. I know I've got the support of my team-mates up on the balcony and for me that's the most important thing.

"If I can make them proud out in the middle and make Australians proud as much as I can then that's my job."

Smith is set to be the focus of much attention during a lengthy tour of England that includes both the World Cup and a subsequent five-Test Ashes series.

But there are no signs as yet that the hype surrounding Smith's return is inhibiting his form.

Saturday saw Smith score a fourth successive fifty for Australia since his suspension following innings of 89 not out and 91 not out in practice matches against New Zealand in Brisbane before he made 76 during Wednesday's World Cup warm-up with the West Indies on the nursery ground at Southampton.

"I'm not reading too much into it, they are just practice games," said Smith.

"Hopefully I can keep this form for the real stuff. But I am feeling good, composed and calm at the crease. Any time you make a hundred for Australia it's a real honour."

Smith, in what was his first press conference since returning to the national set-up, was asked if his enforced absence after a ban imposed by Cricket Australia had done him any good.

"I hope so," he said. "Not too many players have a year out when they are, I guess, at the top of their game."

Smith, who broke down in tears at Sydney airport on the last occasion he spoke to reporters on Australia duty after being sent back from South Africa, added: "I guess having performed at a reasonably high level for four or five years, to have that year away it's given me a chance to freshen up a bit and come back hungrier than ever.

"I feel in a good place and hopefully I can have a big impact for Australia in this World Cup."

Meanwhile England stand-in captain Jos Buttler, who had one of the best views of Smith's century while keeping wicket, said: "He's the same player. He was a class player 12 months ago and he still is.

As for suggestions England would use the ball-tampering scandal as a basis for 'sledging' or verbally abusing their Australian opponents, the mild-mannered Buttler insisted: "I don't think any of our guys get that stuck in.

"The guys just get on with playing cricket."

David Warner World Cup 2019 Cricket
Get the latest updates on ICC Women's Cricket World Cup 2022 and IPL 2022, check out the Schedule , Live Score and IPL Points Table. Like us on Facebook or follow us on Twitter for more sports updates. You can also download the NDTV Cricket app for Android or iOS.