Rohit Sharma's Six Hits Fan In Birmingham, His Gesture After That Wins Hearts On Twitter 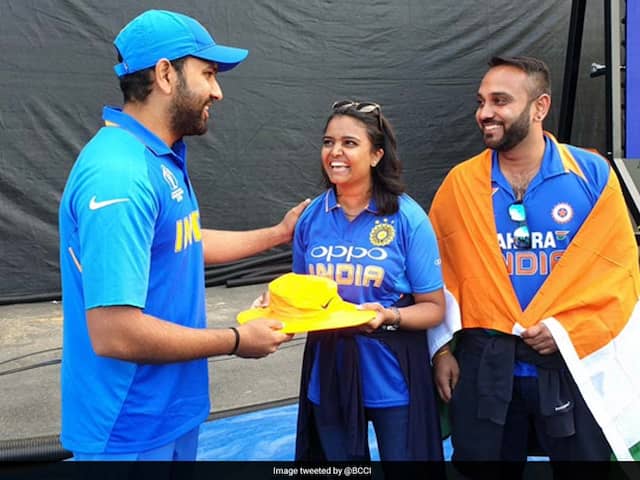 Rohit Sharma unintentionally hit a fan with one of his sixes in the match-winning 104-run knock, his record fourth ODI hundred in the ongoing World Cup 2019, against Bangladesh in Birmingham on Tuesday. After the match, the Indian opener met the injured fan, to check on her and gift her a signed hat. "She got hit by a @ImRo45 maximum and the opener was kind enough to check on her and give her a signed hat," the BCCI captioned the picture of Rohit Sharma with his fan on Twitter.

She got hit by a @ImRo45 maximum and the opener was kind enough to check on her and give her a signed hat.#CWC19 pic.twitter.com/KqFqrpC7dS

The gesture of the India vice-captain won hearts of many on social media, who lauded him for being "down to earth".

What a professional team and what a humble and down to earth players. Match ke saath saath dil bhi jeet liya team India ne.. being so grounded n caring.

Rohit smashed seven boundaries and five sixes during his attacking 92-ball knock. However, one of his hits found the unfortunate Indian fan in the crowd.

The girl, identified as Meena, was hit in the face by the ball when the supporter in front of her failed to catch it.

With a 28-run win over Bangladesh, India clinched a semi-final spot.

Rohit's fourth World Cup century helped him break Sourav Ganguly's record of most centuries in one edition of the World Cup. The former India skipper had scored three centuries in the 2003 World Cup.

On Tuesday, Rohit set the tone for India's domination, putting on 180 runs with opening partner KL Rahul, who made 77.

Virat Kohli's India, who have won six of their eight matches, play their final group game against Sri Lanka in Leeds on Saturday.

Edgbaston, Birmingham World Cup 2019 Cricket Bangladesh vs India, Match 40
Get the latest Cricket news, check out the India cricket schedule, Cricket live score . Like us on Facebook or follow us on Twitter for more sports updates. You can also download the NDTV Cricket app for Android or iOS.