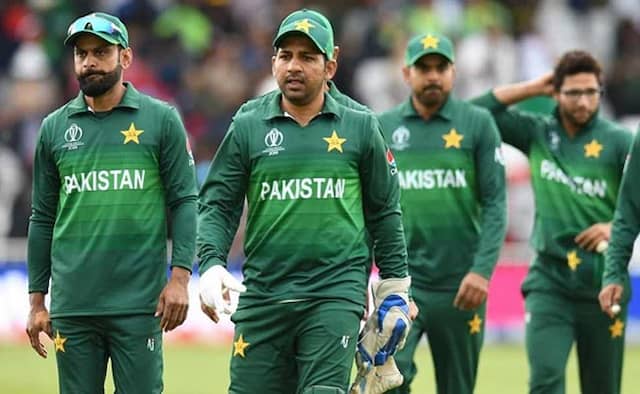 Pakistan were bowled out for just 105 runs in 21.4 overs against the West Indies in their opening match of World Cup 2019 at Trent Bridge on Friday. West Indies then chased down the target inside 14 overs to hammer Pakistan by seven wickets. Oshane Thomas took four wickets as West Indies skittled Pakistan for their second-lowest World Cup total. Chris Gayle then smashed a quick-fire fifty as the West Indies romped home in just 13.4 overs. Following their abysmal display of batting, Pakistan were mercilessly trolled on Twitter.

#PAKvWI
I am Still with Pakistan team
we need strong batting line
If we Continue like that , We,ll Fail yo achiive 50+ against England
Captain @SarfarazA_54 Ahmed Do not gave up . You are Hope . You can do it . Yes you did it in WCT2017 YOU,LL DO IT AGAIN
YES WE BELIEVE pic.twitter.com/4N2iNYKEjs

Opener Fakhar Zaman and Babar Azam were the joint top-scorers with 22 each.

The only other batsmen to reach double figures were Wahab Riaz, who scored 18, and Mohammad Hafeez (16).

Pakistan's sloppy and vulnerable batting was cruelly exposed by some short-pitched bowling by the West Indies pacemen on a Trent Bridge pitch famous for big totals.

"New experience for me, this being my first World Cup," Thomas said.

"I was confident of running in and doing my job. Andre Russell started the job for us, I just followed his footsteps today. Lot of guys tried to mix it up with short balls. I mean, we wanted to execute our plans well."

"Very disappointed at the batting. I was very confident before the match, batting was a key point but we didn't apply it to the short ball," Pakistan captain Sarfaraz Ahmed said after the match.

West Indies Cricket Team World Cup 2019 Cricket West Indies vs Pakistan, Match 2
Get the latest Cricket news, check out the India cricket schedule, Cricket live score . Like us on Facebook or follow us on Twitter for more sports updates. You can also download the NDTV Cricket app for Android or iOS.