West Indies, despite a painstaking 68 from opener Shai Hope and 51 from captain Jason Holder finished on 273 for nine. 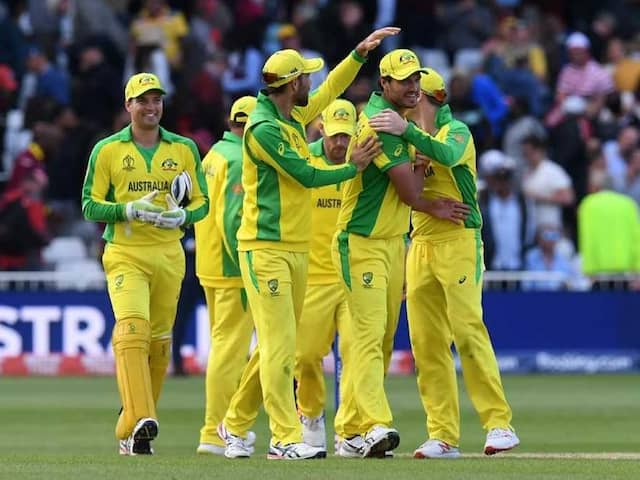 Nathan Coulter-Nile's record-breaking innings laid the platform for Australia's 15-run victory over the West Indies on Thursday as the World Cup holders bounced back from a top-order collapse to make it two successive wins. Australia were in dire straits at 38 for four after the West Indies fast bowlers proved too hot to handle early on at Trent Bridge. But Coulter-Nile's career-best 92 -- the highest score by any number eight batsman or lower in a World Cup -- helped take them to 288 all out.

He carried on a recovery started by former skipper Steve Smith (73), with the pair bailing Australia out in a stand of 102 in 89 balls.

West Indies, despite a painstaking 68 from opener Shai Hope and 51 from captain Jason Holder finished on 273 for nine.

Fast bowler Mitchell Starc did the bulk of the damage with five for 46 -- the first five-wicket haul of this World Cup -- including a late burst of four for two in 11 balls -- as Australia followed up their seven-wicket win over minnows Afghanistan.

The West Indies had bounced out Pakistan for just 105 when winning their tournament opener at Trent Bridge last week and adopted similar tactics against Australia after Holder won the toss.

Oshane Thomas had Australia captain Aaron Finch (six) caught before opening partner David Warner (three) was held at backward point off Sheldon Cottrell -- a wicket that saw the left-arm quick, still a member of the Jamaica Defence Force, celebrate with his trademark salute.

Australia were now 26 for two, with boos ringing out as Warner walked off and Smith walked on -- a now familiar response by crowds in England to the pair having only recently returned from year-long bans for their roles in a ball-tampering scandal in South Africa.

Smith had a lucky break on 26 when he top-edged a hook off Holder only for Cottrell at long leg to slip as he eyed a catch.

His patient innings ended when he flicked Thomas high towards deep backward square only for Cottrell, skirting the boundary, to grab the ball one-handed, throw it back into the field of play as he stepped over the rope -- thereby avoiding a six -- and complete a sensational catch.

But Coulter-Nile cashed in as he surpassed his previous international best of 34.

His blistering assault off 60 balls featuring eight fours and four sixes also saw him beat former Zimbabwe international Heath Streak's previous World Cup best by a No 8 of 72 before, in sight of a hundred, he drove Carlos Brathwaite to Holder at long-off.

In the West Indies' run-chase, big-hitting opener Chris Gayle, having overturned two 'out' decisions, was eventually lbw to Starc for 21.

But Hope, biding his time, completed a 76-ball fifty.

Holder who overturned decisions against him on seven and 22, upped the tempo with several well-struck boundaries.

Russell then got off the mark with a huge straight six off leg-spinner Adam Zampa that took the West Indies to 200 before he was well caught over the shoulder by Glenn Maxwell.

But as long as Holder was there the West Indies still had a chance.

He completed a run-a-ball fifty but trying to take on Starc, rather than wait to attack Australia's lesser bowlers, he was caught at short fine leg as the West Indies' hopes faded.

Trent Bridge, Nottingham World Cup 2019 Cricket
Get the latest updates on IPL 2020, check out the IPL Schedule for 2020 and Indian Premier League (IPL) Cricket live score . Like us on Facebook or follow us on Twitter for more sports updates. You can also download the NDTV Cricket app for Android or iOS.