The record between the subcontinental giants at the World Cup is lopsided, with India having won all six matches in previous editions. 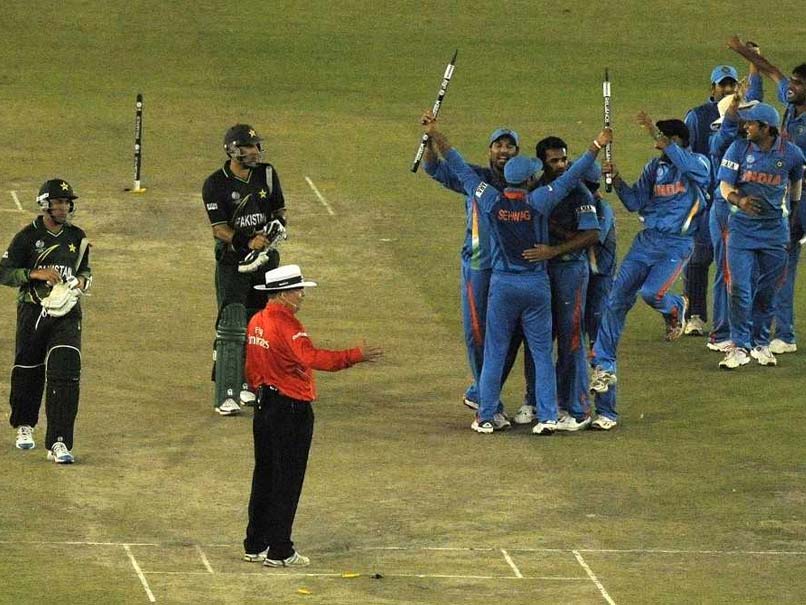 An India vs Pakistan cricket match is a reliable guarantee of sell-out crowds and huge TV ratings.© AFP

An India-Pakistan cricket match is a reliable guarantee of sell-out crowds and huge TV ratings, with Sunday's World Cup 2019 blockbuster between the arch-rivals at Old Trafford sure to be no different. Lurking political tensions and India's refusal to play Pakistan in bilateral series only adds to the sense of expectation and pressure surrounding what remains one the standout fixtures in any form of international cricket. Yet the record between the subcontinental giants at the World Cup is strangely lopsided, with India having won all six of their matches in previous editions of the one-day showpiece tournament.

Below AFP Sport looks back at the history of World Cup matches between India and Pakistan.

India's one-day rivalry with Pakistan dates back to 1978 but it was not until 1992 that they locked horns in a World Cup.

India won comfortably but it was Pakistan's Javed Miandad who stole the show with his cheeky on-field antics.

Annoyed by India wicket-keeper Kiran More's constant appealing and chatter behind the stumps, batting great Miandad did a kangaroo-hopping imitation of the gloveman much to the amusement of the crowd.

Long before the advent of big-hitters in Twenty20 cricket, India batsman Ajay Jadeja took Pakistan speedster Waqar Younis to the cleaners in a 1996 quarter-final in Bangalore.

Waqar was hammered for 40 runs in his last two overs as Jadeja smashed 45 off 25 balls to guide India to 287-8, a total they defended with ease.

Venkatesh Prasad was the star in a game played against the backdrop of the Kargil war.

Despite the political tension surrounding the Super Six encounter -- supervised by a massive police contingent -- the match finished without incident.

India batting great Sachin Tendulkar got the better of Pakistan spearhead Shoaib Akhtar, hitting the fast bowler for a six high over backward point en route to a 98 that set the tone for India's successful run-chase in a league match following a hundred by Pakistan's Saeed Anwar.

Shaharyar Khan, the head of the Pakistan Cricket Board, said afterwards: "India had overshadowed us mainly through the genius of Tendulkar but there was no disgrace in losing the match."

Meanwhile the 'Little Master' himself summed up his innings succinctly by saying: "I told myself, if I see it I will hit it."

It was a given dropping Tendulkar would prove costly for Pakistan but giving him four reprieves in this semi-final was something else and sparked several conspiracy theories.

Tendulkar was dropped on 27, 45, 70 and 81 - -- thrice off the bowling of Pakistan captain Shahid Afridi who said "sorry" to his nation after the loss.

Tendulkar top-scored with 85 as India booked their berth in a final where they clinched their second World Cup title with victory over Sri Lanka at Mumbai's Wankhede Stadium -- their star player's home ground.

Emerging from the shadows cast by the retired Tendulkar, Virat Kohli gave a foretaste of things to come with 107 off 126 balls to thwart a potent Pakistan attack led by Mohammad Irfan.

"I just look to stand up to them because I hate to lose and play passionately," Kohli said after his man-of-the match performance.

Shahid Afridi World Cup 2019 India vs Pakistan, Match 22 Cricket
Get the latest updates on IPL 2021, check out the IPL 2021 Schedule and Indian Premier League Live Score . Like us on Facebook or follow us on Twitter for more sports updates. You can also download the NDTV Cricket app for Android or iOS.