New Zealand found run-scoring tough on what many observers agreed was a slow and two-paced surface. 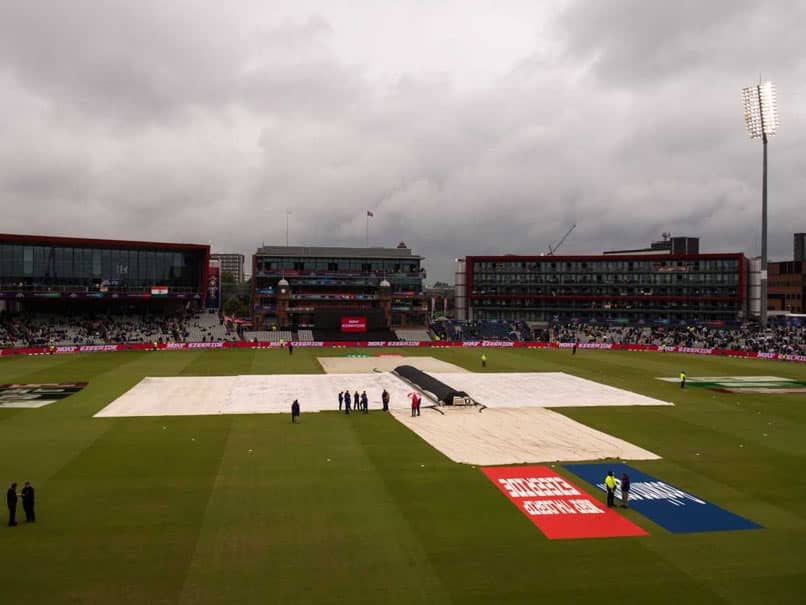 New Zealand were 211 for five in 46.1 overs when the rain stopped play in Manchester.© AFP

Fowler, who spent the bulk of his first-class career with Old Trafford-based Lancashire, was scathing about the conditions at the Manchester ground.

"I feel sorry for the spectators who have travelled and paid hefty prices having to watch this lottery on a very substandard pitch. It's a disgrace," he added.

What an awful wicket for World Cup semifinal. I feel sorry for the spectators who have travelled and paid hefty prices having to watch this lottery on a very substandard pitch. It's a disgrace.

New Zealand found run-scoring tough on what many observers agreed was a slow and two-paced surface.

New Zealand captain Kane Williamson, one of the world's best batsmen, took 97 balls to make 67 after winning the toss.

India still had to bowl well regardless, and paceman Jasprit Bumrah led a disciplined display by his side's attack with one wicket for 25 runs in eight overs.

Low scores have been a feature of this World Cup, with pitches playing in significantly different fashion from the surfaces seen in One-day Internationals in England during recent years.

Some have attributed this to an unusually wet June hampering groundsmen in their pitch preparation.

But Butcher, like Fowler a former England opener, had little sympathy.

"Sorry, but pitches have been garbage this tournament," Butcher tweeted.

"Uneven, two-paced...MIGHT give you an exciting 5 overs at the end of a run chase, but you've scared everybody off in the previous 95," he added.

Sorry, but pitches have been garbage this tournament.

"The guidance we give any host of an ICC event is to prepare the best possible pitches for the conditions in that country -- so in this case the best possible ODI pitch for typical English conditions and we would also look for even bounce and good carry," said a statement from the global governing body.

"The ICC does not instruct groundsmen to prepare pitches in a certain way to advantage, or disadvantage, any team."

According to the weather forecast, intermittent rain is expected on Wednesday as well.

Old Trafford, Manchester World Cup 2019 Cricket India vs New Zealand, 1st Semi Final
Get the latest updates on IPL 2021, IPL Points Table , IPL Schedule 2021 , live score . Like us on Facebook or follow us on Twitter for more sports updates. You can also download the NDTV Cricket app for Android or iOS.