Jimmy Neesham pulled off a fine catch to dismiss Dinesh Karthik as the India's batting struggled against the New Zealand fast bowlers. 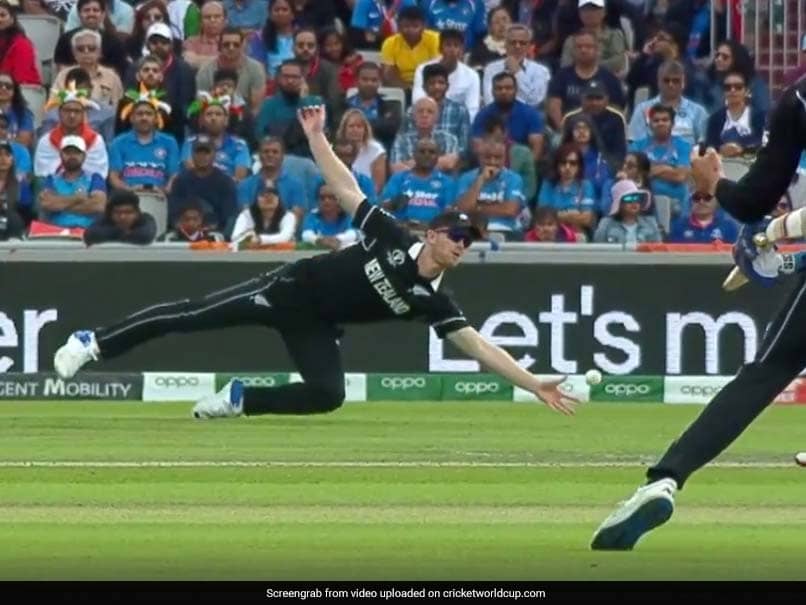 India suffered a dramatic collapse and slumped to 24 for four in 10 overs.© Twitter

Jimmy Neesham pulled off a stunner, one of the catches of the tournament, to help New Zealand get rid of Dinesh Karthik and add to India's miseries in the rain-affected World Cup 2019 semi-final at Old Trafford in Manchester on Wednesday. The experienced batsman failed to impress much with the willow and edged a ball by Matt Henry which was incredibly grabbed with one hand by a diving Jimmy Neesham, the man at point. With the dismissal of Dinesh Karthik, India were reduced to 24 for four in 10 overs, chasing a competitive target of 240 runs.

The best catch of #CWC19 so far?#INDvNZhttps://t.co/MKs3NdMqxX

"One of the great catches," says Mark Nicholas on commentary.

The fans too celebrated the impressive catch on Twitter, with many suggesting Neesham is taking the cake in the big-ticket semi-final.

James Neesham has picked a blinder. As good as it gets. #INDvNZ

Catch of the tournament

After restricting New Zealand to 239/8 in 50 overs on the reserve day, India suffered a dramatic collapse and slumped to 24 for four in 10 overs.

India saw key batsmen Rohit Sharma, Virat Kohli and KL Rahul all depart for one run each as Trent Boult and Matt Henry made a blistering start with the new ball.

Sharma had come into this match having made five hundreds this tournament, a record for a single World Cup.

But the opener fell for just one when he edged a fine Henry delivery that curved away to wicketkeeper Tom Latham.

India captain Kohli went next, lbw to a superb in-swinger from left-armer Boult.

Kohli reviewed but replays upheld English umpire Richard Illingworth's original decision, to the despair of the massed ranks of India fans in the ground.

India were then 5-3 when Rahul was brilliantly caught by a diving Latham following an edge off Henry.

At that stage, India, two-time world champions, had lost three wickets for one run in 10 balls against 2015 runners-up New Zealand.

Old Trafford, Manchester Cricket
Get the latest updates on IPL 2020, check out the IPL Schedule for 2020 and Indian Premier League (IPL) Cricket live score . Like us on Facebook or follow us on Twitter for more sports updates. You can also download the NDTV Cricket app for Android or iOS.