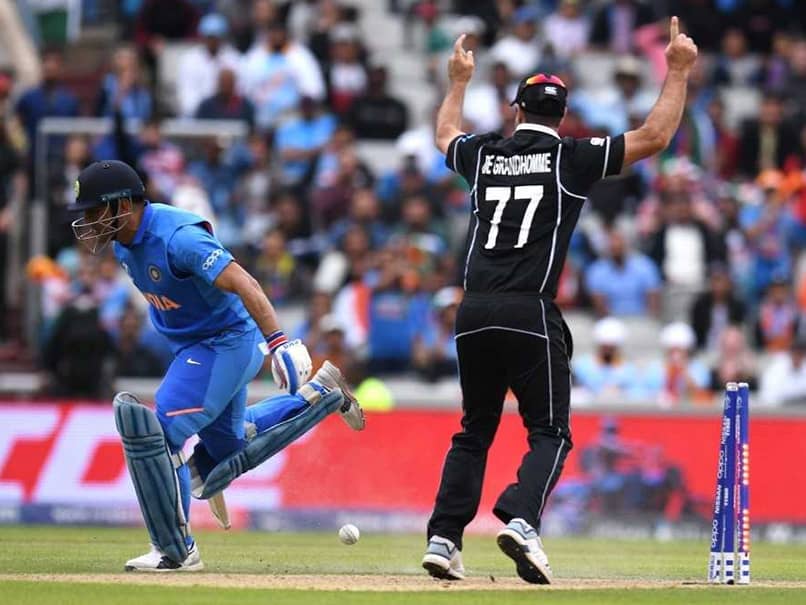 Ms Dhoni's run out in the penultimate over proved crucial as India lost to New Zealand in the semi-final by 18 runs at Old Trafford in Manchester. 100-run partnership between MS Dhoni and Ravindra Jadeja for the seventh wicket gave India some hope after a stunning top-order collapse left them reeling against New Zealand on Wednesday. India lost key batsmen Rohit Sharma, Virat Kohli and KL Rahul for just one run each as they slumped to five for three and were 24 for four when Dinesh Karthik was out for six. But India recovered to 150-6 off 40 overs, needing a further 90 runs off the remaining 60 balls to reach a victory target of 240 at Old Trafford. But that wasn't to be as both set batsmen Jadeja and Dhoni got out in quick succession trying to up the ante. Earlier, New Zealand added 28 runs in the remaining 23 balls of their innings to finish on 239-8 after rain had stopped play on Tuesday. Ross Taylor, who resumed on 67 not out, top-scored with 74 after Williamson had made a masterly 67 in awkward conditions. (SCORECARD)

Old Trafford, Manchester World Cup 2019 India vs New Zealand, 1st Semi Final Cricket
Get the latest updates on IPL 2021, IPL Points Table , IPL Schedule 2021 , live score . Like us on Facebook or follow us on Twitter for more sports updates. You can also download the NDTV Cricket app for Android or iOS.