Rishabh Pant At No.4: Rohit Sharma Sees The Funny Side. Watch

Rishabh Pant stepped in to bat at No.4 in the India vs England World Cup 2019 clash ahead of the in-form Hardik Pandya. 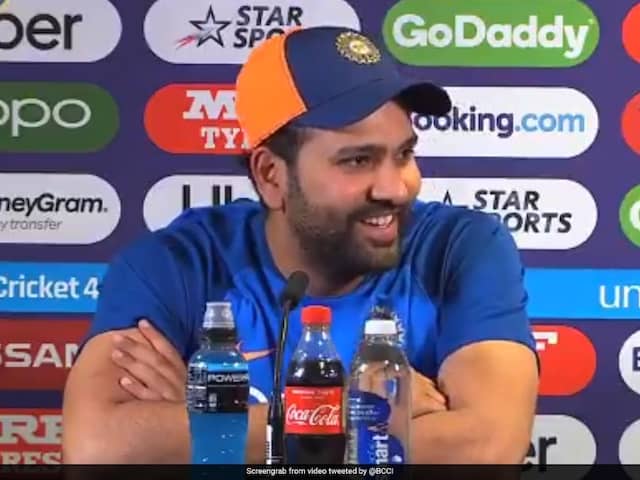 Rishabh Pant made his maiden World Cup 2019 appearance batting at No.4, ahead of in-form Hardik Pandya, in India's mammoth chase against England on Sunday, leaving many surprised. Hardik Pandya was promoted to bat at No.4 during India's previous matches against Pakistan and Australia, with his quick cameos coming handy for India. However, India's deputy captain Rohit Sharma, who addressed the media after India's loss to England in the World Cup 2019 clash, saw the funny side of Rishabh Pant stepping in to bat at No.4.

Rishabh Pant had replaced injured Vijay Shankar in India's playing XI against England. Vijay Shankar, who was backed as India's No.4 batsman after Shikhar Dhawan's injury, was ruled out of the India vs England World Cup 2019 match with a "toe niggle".

The 21-year-old Pant made his sixth One-Day International (ODI) appearance. He is yet to score a century or half-century in this format.

Pant was the only change for away team in the India vs England World Cup 2019 match. Shankar, who has been replaced in the playing XI, made three appearances at the World Cup 2019 but did not perform as per expectations.