Jason Roy and umpire Joel Wilson were not hurt during the incident. 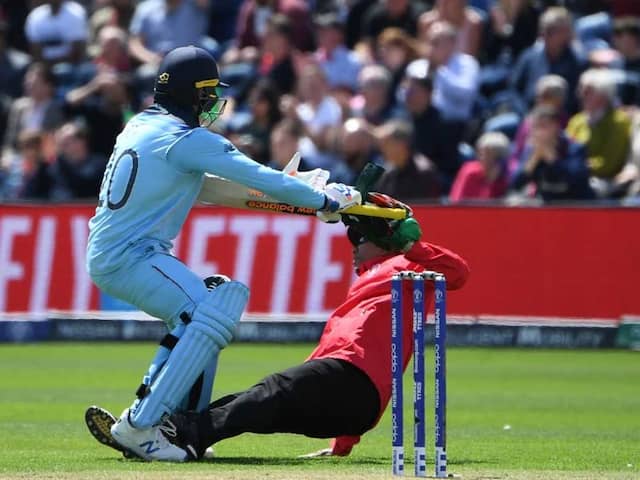 Jason Roy bludgeoned his way to 153 runs against Bangladesh.© AFP

Jason Roy bludgeoned his way to 153 runs as England defeated Bangladesh by a massive 106 runs in the World Cup 2019 match at the Sophia Gardens in Cardiff on Saturday. While it was a happy outing for Jason Roy, he also gave a moment to laugh to his English teammates from the stands by cluelessly taking out umpire Joel Wilson while running towards the non-strikers end to complete his ninth century. Jason Roy then made sure the collision has done no serious damage to the umpire as his teammates, who were anticipating his century celebration, broke out into laughter.

An unusual way to celebrate 100 for Jason Roy! We're glad umpire Joel Wilson is on his feet again and smiling! #CWC19 | #ENGvBAN pic.twitter.com/pCAvhzc1Px

ICYMI, watch the rather dramatic moment when Jason Roy brought up his maiden World Cup and got this reaction from his team-mates (and everybody else!)

The Surrey batsman faced 121 balls, hitting 14 fours and five sixes as he fell just short of Andrew Strauss's England World Cup record of 158 against India in Bangalore in 2011.

Roy after the match-winning performance said he was happy with his and fellow batsman Jonny Bairstow's knocks. He also believes England batting-line up are capable of raking up big scores in any match.

"It was great to get out there and put in a big performance. Just the way Jonny and myself batted, we built the innings well, weren't quite sure how the pitch will behave," Roy said.

"With that batting line-up, no matter what we get off the first 10 overs, batting the whole 50, we're gonna get a big score," he added.

The round-robin group stage sees Bangladesh next play Sri Lanka at Bristol on Tuesday, with England facing the West Indies at the Oval on Friday.

Jason Roy Cricket
Get the latest Cricket news, check out the India cricket schedule, Cricket live score . Like us on Facebook or follow us on Twitter for more sports updates. You can also download the NDTV Cricket app for Android or iOS.