Bangladesh were bowled out for 280 despite a century from Shakib Al Hasan. 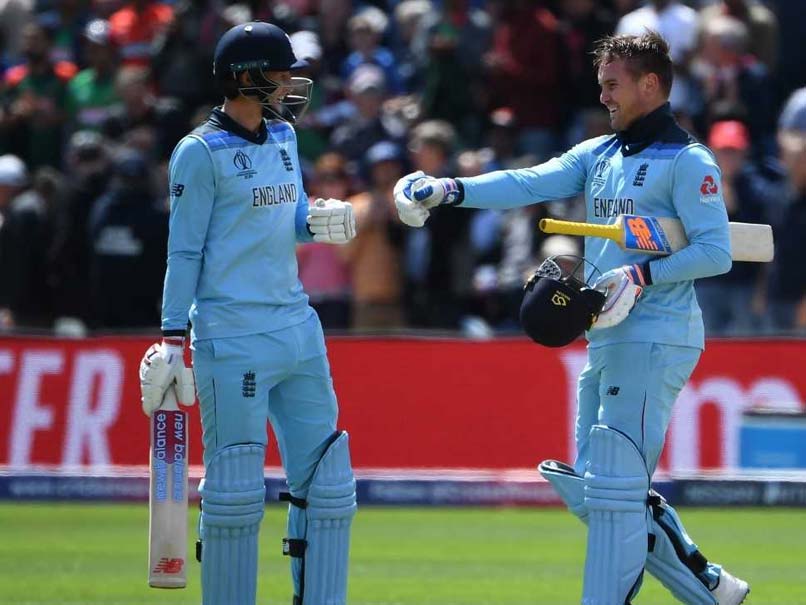 Jason Roy hit the highest individual score of the World Cup so far as England got their campaign back on track with a 106-run win over Bangladesh in Cardiff on Saturday. Following a surprise defeat by Pakistan, which followed England's opening 104-run rout of South Africa, captain Eoin Morgan urged the hosts to "stick to what we do well". Tournament favourites England, whose rise to the top of the one-day international rankings since Bangladesh knocked them out of the 2015 World Cup has been based on aggressive batting, lived up to his words.

Roy's 153 took England to an imposing 386 for six, leaving Bangladesh needing to surpass Ireland's 329-7 against England in 2011, the highest score by any team batting second to win a World Cup match.

Despite Shakib Al Hasan's 121 - just the third Bangladesh World Cup hundred after Mahmudullah made two in 2015 - the Tigers were never in the hunt.

On a Sophia Gardens ground where they famously beat Australia in a 2005 ODI, Bangladesh were eventually dismissed for 280 with seven balls to spare.

Their chase got off to a bad start when fast bowler Jofra Archer (3-29) dismissed Soumya Sarkar for two with a ball that clipped the top of the left-hander's off stump.

Archer, whose 10 wicketless overs against Pakistan cost 79 runs, was far more threatening on Saturday as he reached speeds of 95 miles (153 kilometres) per hour.

But Shakib anchored the innings, flicking Archer for six on his way to a 95-ball century that also included nine fours.

Shakib put on 106 with Mushifqur Rahim (44), a partnership that ended when Roy, who dropped a straightforward chance against Pakistan, held a good catch at point.

And 169-3 soon became 170-4 when Mohammad Mithun fell for a duck after edging leg-spinner Adil Rashid to wicket-keeper Jonny Bairstow.

The Test gloveman was behind the stumps after Jos Buttler suffered a hip injury during a typically dashing 64.

Shakib, who had hit fifties in a win over South Africa and a loss to New Zealand this World Cup, was eventually yorked by Ben Stokes to leave Bangladesh on the brink of defeat.

Pace bowling all-rounder Ben Stokes followed up to finish with figures of 3-23.

England were sent in to bat by Tigers captain Mashrafe Mortaza on a green-tinged pitch, but Roy and Bairstow (51) seized the initiative during a rapid first-wicket stand of 128.

The in-form Roy completed a 92-ball century in bizarre fashion when, not looking, he collided with umpire Joel Wilson as he completed what should have been a single to take him to 97, only for Mithun at deep square leg to misfield a ball for four. Both Roy and Wilson were unhurt.

Roy was finally caught by Mashrafe off Mehidy Hasan Miraz, holing out after hitting three towering sixes in a row off the spinner.

The Surrey batsman faced 121 balls, hitting 14 fours and five sixes as he fell just short of Andrew Strauss's England World Cup record of 158 against India in Bangalore in 20ll.

"There was a bit of change in the game plan. We didn't allow them to get early wickets and we knew we would be able to catch up," said Roy during the break between innings.

The round-robin group stage sees Bangladesh next play Sri Lanka at Bristol on Tuesday, with England facing the West Indies at the Oval on Friday.

Bangladesh Cricket Team World Cup 2019 Cricket England vs Bangladesh, Match 12
Get the latest updates on SA vs IND 2021-22, check out the Schedule and Live Score . Like us on Facebook or follow us on Twitter for more sports updates. You can also download the NDTV Cricket app for Android or iOS.