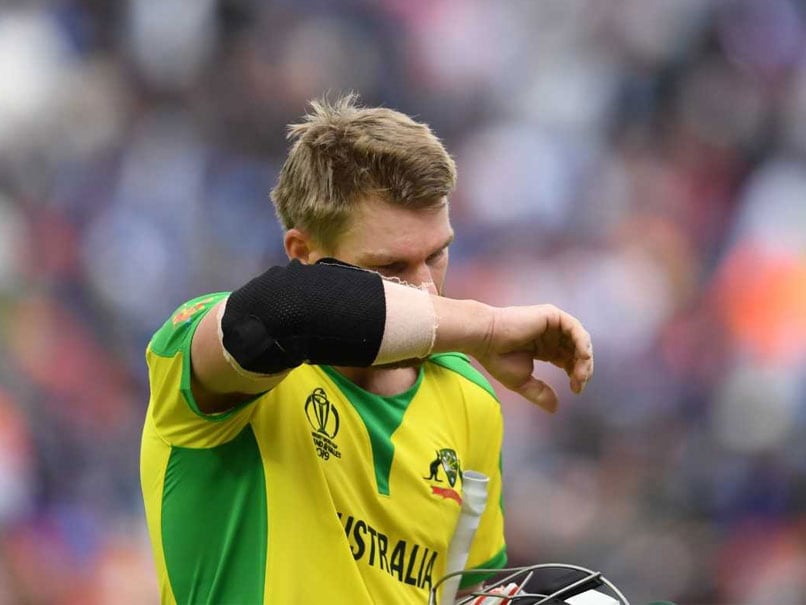 David Warner failed to get off the blocks and scored a 84-ball 56.© AFP

India defeated Australia by 36 runs at the Oval on Sunday to register their second win of the World Cup 2019. Riding on a brilliant hundred by Shikhar Dhawanand half-centuries from Virat Kohli and Rohit Sharma, Team India posted a huge total of 352/5 after Kohli won the toss and opted to bat. On the back of a late flourish by Hardik Pandya, MS Dhoni and KL Rahul, team India managed to score 116 runs in the last 10 overs that proved to be too much at the end for the Aussies. During the chase, Australia's batting star David Warner failed to get off the blocks and scored a 84-ball 56, which is his slowest half century of his One-day International career.

During the post-match press conference, Australian captain Aaron Finch came to the aid of his opening partner and said that he will bounce back soon.

"They bowled well to him (Warner). The wicket was a touch slow when we started to bat. He's (Warner) a great batsman; he's a world-class player and he'll bounce back," Finch said while praising Indian bowlers.

India were clinical in all three departments of the game, after the batsmen set it up by posting a huge total on the board, fielders reflected two run outs, bowlers kept the Australian batsmen in check throughout the innings to bundle Australia out for 316.

Reflecting on the loss, Finch said, "Just one of those games (where) they outplayed us. You look at everything (when asked if he'd change the combination). You assess the conditions; you look for different combinations and different balances over time."

For India, Jasprit Bumrah and Bhuvneshwar Kumar picked up three wickets each while the star of the previous game Yuzvendra Chahal also bagged a couple of wickets.

Finch further marked out that his bowlers gave away too many runs at the back end of the innings which made the difference at the end.

"They got 120 off the last 10 overs, which is a lot. We didn't bowl well. With so much batting to come, makes it tough to stop. There wasn't huge amount on offer (help for the bowlers). We could have been straighter, dried up (runs) a little bit at times. They (India) bat very deep, you want to go for wickets," he said.

With this loss, Australia are now at the fourth spot with two wins in three games, while India climbed up the ladder to secure third place with their second consecutive win in as many matches.

Virat Kohli's men will next take on New Zealand on Thursday.

Aaron Finch
Get the latest updates on India vs South Africa and check out  Schedule, Results and Live Score. Like us on Facebook or follow us on Twitter for more sports updates. You can also download the NDTV Cricket app for Android or iOS.