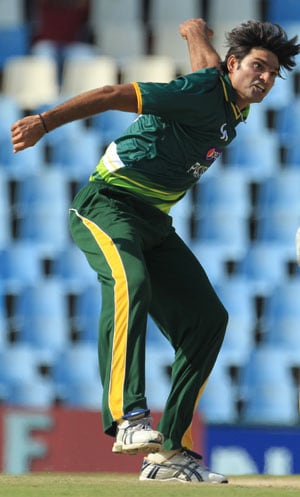 Captain Misbah-ul-Haq scored an unbeaten half century and Mohammad Irfan took a career-best 4-33 as Pakistan beat South Africa by six wickets in the second one-day international on Friday to level the five-match series 1-1.

Misbah then led from the front with a gritty 57 not out and Shoaib Malik hit an enterprising 35 off 38 balls to guide Pakistan to 192-4 in 39.2 overs.

Pakistan, whitewashed 3-0 in the Test series, lost the first ODI by 125 runs. The third match will be at Johannesburg on Sunday.

Misbah made sure Pakistan batting did not crumble while chasing a modest target at SuperSport Park where Pakistan also won the Twenty20 match.

"It is really satisfying for us, the batsmen are getting the confidence back," Misbah said. "Picking Irfan was an attacking move, he gave us a big advantage. There were a few spots in the pitch where the ball was stopping and kicking, there was a bit of variable bounce, it was not easy to bat on."

The captain hit three fours and three sixes in his 75-ball knock and added 77 runs for the unbroken match-winning, fourth-wicket stand with former skipper Malik.

Malik was more enterprising as he hit left-arm fast bowler Lonwabo Tsotsobe for three boundaries in one over in his knock off 38 balls.

South Africa had a glimmer of hope when it reduced Pakistan to 69-3 in the 15th over before Misbah and Younis Khan (32) ensured there were no hiccups with a 46-run third-wicket partnership.

Earlier, Irfan troubled batsmen with his extra bounce and removed Hashim Amla (17) and first ODI century-maker Colin Ingram off successive deliveries before getting rid of Graeme Smith (10) and Faf du Plessis (17) to leave South Africa reeling at 62-5 in 11 overs.

Farhaan Behardien (58) scored a fighting maiden half century and holed out in the deep a ball before the thunderstorm forced the players off the field in the 39th over. Robin Peterson (44) added 67 with Behardien before he was the last man to be dismissed in the 44th over.

Pakistan's decision to include a third paceman in place of a batsman paid off as South Africa captain AB de Villiers won the toss and elected to bat first.

Irfan extracted lot of bounce from the pitch and found the edges of Amla's and Ingram's bats in his third over. Ingram was adjudged caught behind by television umpire Kumar Dharmasena despite inconclusive replays of hot spot.

De Villiers also misjudged the extra bounce of Junaid Khan and was caught in the slips while attempting to leave a short-pitched delivery off the left-arm paceman.

Irfan bowled a lengthy opening spell of seven overs and further dented South Africa with Smith getting a faint edge, and du Plessis was brilliantly caught and bowled by the diving fast bowler with his left hand.

"Disappointing performance, Pakistan took the initiative early on. We fought back nicely, got a decent target towards the end," De Villiers said.

"It's still a big series (and) we are mature enough to know exactly where we went wrong. Come Sunday, we'll come back fighting again. Hopefully, there'll be pace and bounce in Johannesburg."

Behardien repaired the innings with partnerships of 44 with Ryan McLaren (17) and another 67 off 108 balls with Robin Peterson.

Beherdien's dismissal and the immediate thunderstorm robbed the South Africans of momentum.

The home team was 177-7 in 38.4 overs when the rain started, and Pakistan did well to allow only 14 more runs when play resumed.

Comments
Topics mentioned in this article
Cricket Shoaib Malik Hashim Amla South Africa Cricket Team Mohammad Irfan New Zealand Cricket Team Pakistan Cricket Team Farhaan Behardien World Cup 2011 Ijaz Butt Younis Khan
Get the latest updates on India vs Australia Series, check out the India vs Australia Schedule for 2020-21 and Ind vs Aus live score . Like us on Facebook or follow us on Twitter for more sports updates. You can also download the NDTV Cricket app for Android or iOS.