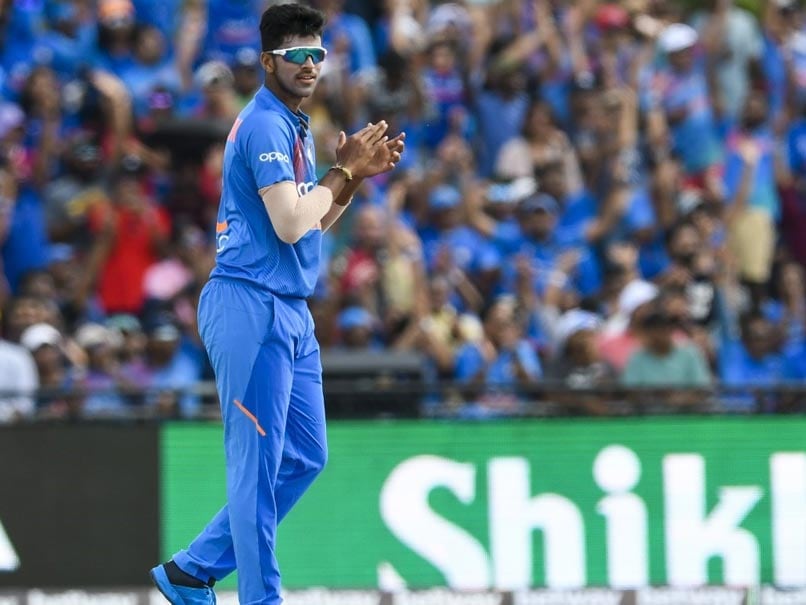 Washington Sundar gave away just 12 runs and picked up a wicket in the 3 overs he bowled.© AFP

"Starting with the new ball, the way Sundar has bowled against guys who come hard at the ball, he's done a tremendous job. The composure he's shown has been outstanding. He's become fitter, leaner and is very handy with the bat as well," expressed Kohli

"He is definitely going to be a factor for us."

Electing to bat, Rohit Sharma top scored for India with a fine 67 off 51 balls. Krunal Pandya smashed an unbeaten 20 off just 13 balls while Ravindra Jadeja chipped in with nine not out off four balls as India posted 167 for five in 20 overs.

In reply, the West Indies lost two early wickets while Nicholas Pooran struggled to get going, scoring 19 off 34 balls. Rovman Powell hit 54 off 34 balls to keep the Windies in the hunt but was sent packing by Krunal Pandya before he could inflict more damage.

With the West Indies labouring at 98 for four in 15.3 overs, rain forced play to be suspended.

After securing the series win, Virat Kohli was open to the idea of experimenting in the final T20I.

"We set up a good foundation. Good finish from (Ravindra) Jadeja and Krunal (Pandya) to get us past 160. The way we were going, could have got to 180, but pitch slowed down considerably in latter half."

India will take on West Indies in the third and final T20I of the rubber on Tuesday.

Rohit Sharma West Indies vs India 2019 West Indies vs India, 2nd T20I Cricket
Get the latest updates on ICC T20 Worldcup 2022 and CWG 2022 check out the Schedule, Live Score and Medals Tally. Like us on Facebook or follow us on Twitter for more sports updates. You can also download the NDTV Cricket app for Android or iOS.