Virat Kohli led a workmanlike effort from India's top order with a carefully crafted innings of 76 to help India post 264 for five on day 1 of the second Test. 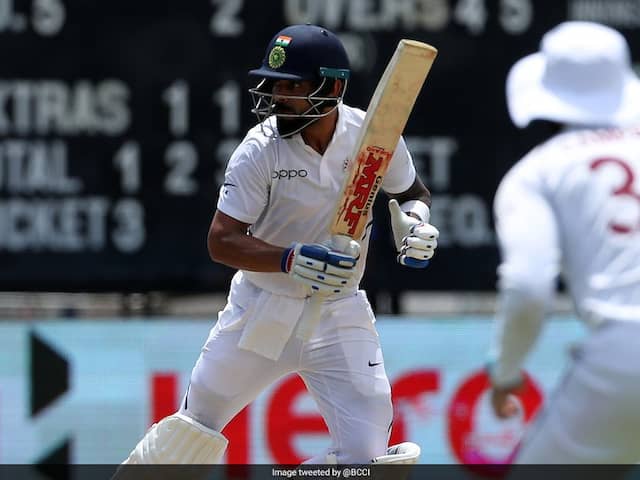 Virat Kohli brought up his 22nd Test half-century on day 1 of the second Test against the West Indies.© Twitter

West Indies captain Jason Holder eventually won the battle with Indian counterpart Virat Kohli but the tourists were still well-placed at 264 for five at stumps on the opening day of the second and final Test of the series at Sabina Park on Friday. Pursuing a victory which would lift him ahead of Mahendra Singh Dhoni as his country's most successful Test captain ever with 28 wins, apart from sweeping the two-match series of course, Kohli led a workmanlike effort from India's top order with a carefully crafted innings of 76.

His dismissal by Holder in the day's final session, caught at the wicket after four hours at the crease during which he faced 163 deliveries and struck ten fours, appeared to give the West Indies an opening to limit their opponents' progress in Jamaica.

However, Hanuma Vihari (42 not out) and wicketkeeper-batsman Rishabh Pant (27 not out) stayed together to the close to leave the home side with considerable work still to do in India's first innings as they seek a series-levelling victory following a humiliating 318-run defeat in the first Test in Antigua a week earlier.

Vihari and Pant resume on the second morning with their sixth-wicket partnership already worth 62 runs.

Holder's vital dismissal of Kohli gave the seam-bowling all-rounder his third wicket of the innings.

Carrying an additional burden with strike bowler Shannon Gabriel less than fully fit, the home captain ended the day with impressive figures of three for 39 off 20 disciplined overs.

On a green-tinged pitch, it was Holder who gave his side the breakthrough after he put India in at the start of the day. He brought himself into the attack after half an hour and removed K.L. Rahul in his first over via a straightforward catch by debutant Rahkeem Cornwall at first slip.

One of two newcomers to senior international cricket in the home side, the burly 26-year-old off-spinning all-rounder then enjoyed his first success with the ball when he extended Chesteshwar Pujara's run of low scores in the series, the batsman being caught by Shamarh Brooks at backward-point off a miscued cut in Cornwall's third over.

Kohli joined Mayank Agarwal with the third-wicket pair gradually taking control of the situation either side of the lunch interval in a stand worth 69 runs.

Agarwal reached the third half-century of his fledgling international career before becoming Holder's second wicket for 55 via another first slip catch by the alert Cornwall.

Cornwall had replaced medium-pacer Miguel Cummins from the first Test.

Shai Hope, who was drafted into wicketkeeping duties in that match due to injury to regular gloveman Shane Dowrich, failed a late fitness test on a damaged hand, allowing Jahmar Hamilton to become the first cricketer from the U.S. Virgin Islands to play at senior level for the West Indies.

India unsurprisingly retained the same team as they seek a clean sweep of all the completed international matches of this campaign and also a first-ever clean sweep of a Test series in the Caribbean.

There was a worrying moment before the start of play when former West Indies captain Vivian Richards had to be helped off the field and taken away for medical treatment when he seemed to fall ill.

Working as a commentator in the television coverage of the series, Richards appeared to be affected by the intense heat of the morning while involved in the pre-match coverage.

Medical officials confirmed the situation as a case of heatstroke for the legendary batsmen and it is understood that he was recovering well.

Virat Kohli West Indies vs India 2019 Cricket West Indies vs India, 2nd Test
Get the latest Cricket news, check out the India cricket schedule, Cricket live score . Like us on Facebook or follow us on Twitter for more sports updates. You can also download the NDTV Cricket app for Android or iOS.