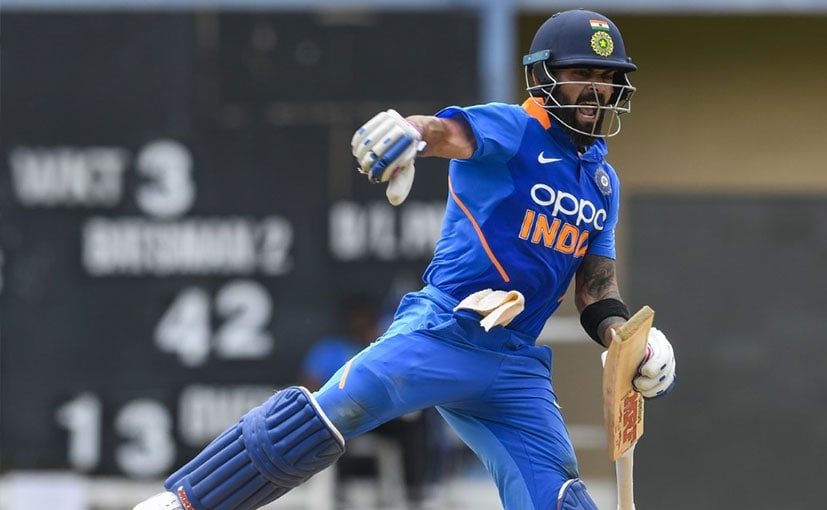 Virat Kohli's 42nd century in One Day International (ODI) cricket helped India beat the West Indies by 59 runs (DLS method) in the second ODI at the Queen's Park Oval in Port of Spain, Trinidad on Sunday. Kohli who failed to cross the three-figure mark during World Cup 2019, notched up  a century in his first ODI innings after the World Cup. Following his match-winning performance, Kohli appeared on Chahal TV -- a show hosted by leg-spinner Yuzvendra Chahal -- and spoke candidly about various issues. Speaking about his dance moves which went viral after the first ODI was washed-out in Guyana, Kohli said he doesn't want to restrain himself on the field just because he is the captain of the team.

From @imVkohli's record 42 ton to his dance moves ????, @yuzi_chahal makes a smashing debut in the Caribbean. By @28anand #TeamIndia #WIvIND

"I am enjoying myself on the cricket field. I don't let myself get into a typical mould where I have to restrain myself as I am the captain of the team. We have been blessed to represent India and thus it's important to enjoy the life. We should dance whenever there is music played and enjoy with the opposition players as well. Right now, I am in a very happy space in my life and that's why I start dancing whenever I get the opportunity," Kohli said on Chahal TV.

Virat Kohli's century helped him break a couple of more records as he surpassed former Indian captain Sourav Ganguly's ODI tally of 11,363 runs to become India's second-most successful batsman in the format, only behind batting maestro Sachin Tendulkar who has 18,426 runs to his name.

Kohli also revealed how tired he was when he had reached 65 during his 120-run knock.

"It is always our target that one of our top three gets a big score. Rohit has been doing that consistently for us. I have also chipped in whenever I have got an opportunity," said Kohli.

"Unfortunately, both Rohit and Shikhar failed today. So, it was important for me to stay at the wicket for a long time and take the score somewhere near 270-280.

"Honestly, I was too tired by the time I reached 60-65. But then the situation was such that I had to play without taking too much of a risk and build a partnership. As a cricketer, we always learn that whenever we are thinking about the team, we get the enthusiasm and the energy to play long."

"The conditions were quite challenging because it rained in the middle and then it got more humid," he added.

When asked about his motivation to play consistently for the team, whether while batting or fielding, the Indian skipper said, "My mindset is quite simple. I want to contribute to the team in whichever way possible. Whether it's a catch or a run-out, I want to give my 100 per cent.

"I think every player should have a disciplined lifestyle so that he can give his 100 per cent on the field. If you are not giving your 100 per cent, I don't think you are doing justice to the team," he added.

India take on the West Indies in the third and the final match of the ODI series in Port of Spain on August 14.

West Indies Cricket Team Queen's Park Oval, Port of Spain, Trinidad West Indies vs India 2019 Cricket West Indies vs India, 2nd ODI
Get the latest updates on ICC Women's Cricket World Cup 2022 and IPL 2022, check out the Schedule , Live Score and IPL Points Table. Like us on Facebook or follow us on Twitter for more sports updates. You can also download the NDTV Cricket app for Android or iOS.