Shreyas Iyer scored 71 off 68 balls -- his third half-century in eight ODIs -- to help India post a score of 279 for seven against the West Indies. 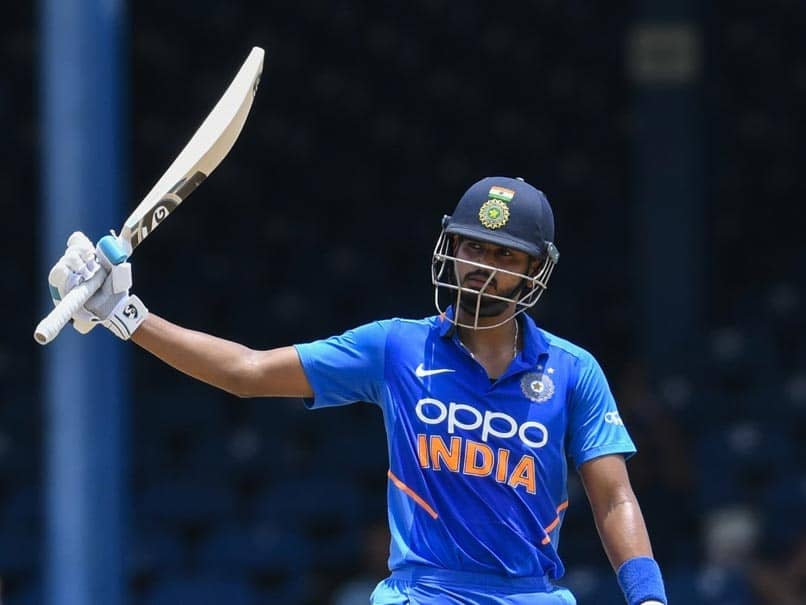 Shreyas Iyer scored 71 off 68 balls to help India post 279 for nine vs the West Indies.© AFP

Shreyas Iyer struck a fine 71 off 68 balls in the second ODI against the West Indies at the Queen's Park Oval in Port of Spain, Trinidad on Sunday. Shreyas Iyer's third half-century in eight ODIs, helped India post a score of 279 for seven. Shreyas Iyer along with skipper Virat Kohli, who hit his 42nd hundred in ODIs, put on 125 runs for the fourth wicket. Lavishing praise on Shreyas Iyer, Sunil Gavaskar said "if this doesn't help him get a more permanent slot in the Indian middle-order, I don't know what will".

The former India captain also backed Shreyas Iyer to be an answer to India's No.4 problem. Gavaskar said that the stylish right-hander was better suited to the No.4 position than Rishabh Pant.

"In my view, Rishabh Pant is much better, like an MS Dhoni, at 5 or 6 as a finisher because that's where his natural game and natural flair will come into play," PTI quoted Sunil Gavaskar as saying to 'Sony Ten' channel.

At the Queen's Park Oval, Iyer added 125 runs with skipper Virat Kohli (120) after India lost the wickets of Rohit Sharma and Rishabh Pant (20) in quick succession.

The 24-year-old from Delhi didn't get game time during the T20I series. He was part of the playing XI in the first ODI, which was washed out after 13 overs at Guyana.

Heaping praise on Iyer, Gavaskar said: "He has grabbed his opportunity. He came at No.5. He had plenty of overs. He had the company of his skipper, Virat Kohli. Nothing quite like it because the skipper takes the pressure off you.

"The best place to learn in cricket is the non-striker's end. That's what Shreyas Iyer was doing with Virat Kohli at the other end," he added.

Iyer, the Delhi Capitals skipper, was in good form during the Indian Premier League but he was ignored for the World Cup and Gavaskar believes the youngster should now get a longer run in ODI cricket.

"I think, if this doesn't help him get a more permanent slot in the Indian middle-order, I don't know what will," Gavaskar said.

"In the five matches, he played before this, he scored 2 fifties and hit a highest score of 88. He hadn't done anything wrong to be left out of the 14 (15) (World Cup). But that's in the past.

"Now he has come back and scored a 71 in his first opportunity. So I think he will get a longer run."