Jasprit Bumrah ran through the West Indies top-order in the second innings of the first Test in Antigua on Sunday as he bagged his fourth five-wicket haul in Tests. 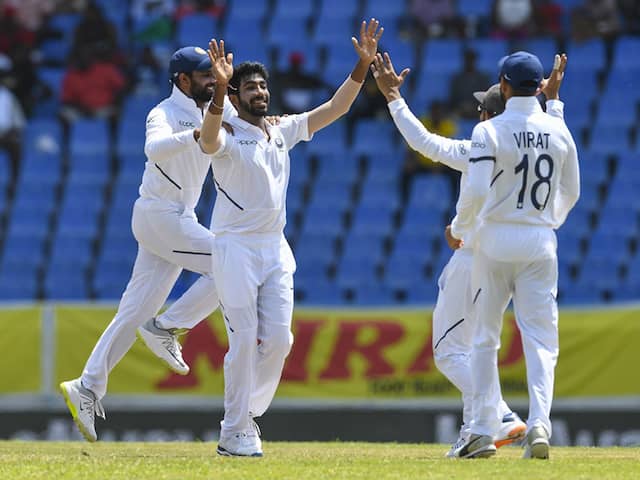 Jasprit Bumrah bagged his fourth five-wicket haul in Tests as he ran through the West Indies top-order in Antigua on Sunday to help India register a convincing 318-run win in the first Test. The West Indies were bowled out for 100 in their second innings and it was Bumrah who laid the foundation for India's biggest win overseas in terms of runs (318). With this performance, Bumrah became the first Asian bowler to pick five-wicket hauls in South Africa, England, Australia and the West Indies.

The Indian bowling attack led by Bumrah has had world cricket sit up and take note and another example was on display from the Indian seam bowlers at the Sir Vivian Richards Stadium on Sunday when they bundled out the West Indies for 100 in their second innings after plundering 343/7 declared, to set the hosts a target of 419.

Bumrah tormented the Windies batsmen with his deadly in-dippers as they did not stand a chance in front of him.

"Feeling good and we built pressure as a bowling unit which was nice. We used the breeze to our advantage and stuck to our plans. Lot of hard-work and practice goes into that (about bowling the out-swinger). I always had the in-swinger but the more I played the more confident I got," Jasprit Bumrah was quoted as saying by IANS.

"Playing with the Dukes ball in England helped me a lot, too. It has helped my confidence. Always trying to evolve as a bowler and always trying to do new things and when the ball is not swinging maybe try and use the seam to get the movement," he added.

India will now take on the West Indies in the second and final Test of the series at the Sabina Park in Kingston from Friday.

Jasprit Bumrah West Indies vs India 2019 West Indies vs India, 1st Test Cricket
Get the latest Cricket news, check out the India cricket schedule, Cricket live score . Like us on Facebook or follow us on Twitter for more sports updates. You can also download the NDTV Cricket app for Android or iOS.