Jasprit Bumrah's unconventional bowling style has been in focus right from the time he started playing for India. 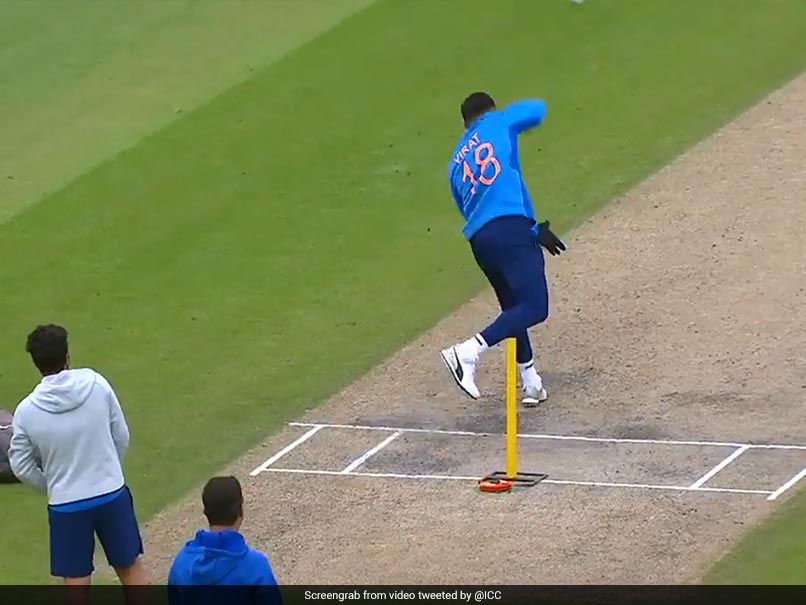 Jasprit Bumrah's unconventional bowling style makes it hard for batsmen of any stature to decipher him in a hurry. As much as Jasprit Bumrah's pace and variation is hard to be picked by any batsmen, it is also a fascinating sight to witness his slinging bowling action. So much so that even India skipper Virat Kohli tried to imitate Jasprit Bumrah's bowling style during a practice session in the World Cup 2019. The video of the same is doing rounds on Twitter. The International Cricket Council (ICC) also posted the video, with a caption which said, "Imitation from the captain is the best form of flattery".

Check out the video here:

Imitation from the captain is the best form of flattery #INDvNZ | #CWC19 | #TeamIndia pic.twitter.com/XXsbmr19GI

Bumrah picked up a wicket in the India vs New Zealand World Cup 2019 semi-final in Manchester.

He has also been India's pace spearhead in the World Cup 2019, ahead of his fellow pacers Bhuvneshwar Kumar and Mohammed Shami.

Virat Kohli World Cup 2019 Cricket
Get the latest updates on Fifa Worldcup 2022 and check out  Fifa World Cup Schedule, Stats and Live Cricket Score. Like us on Facebook or follow us on Twitter for more sports updates. You can also download the NDTV Cricket app for Android or iOS.