Jason Holder has set his sights on India captain Virat Kohli and spinner Ravichandran Ashwin ahead of the first Test of the two-match series. 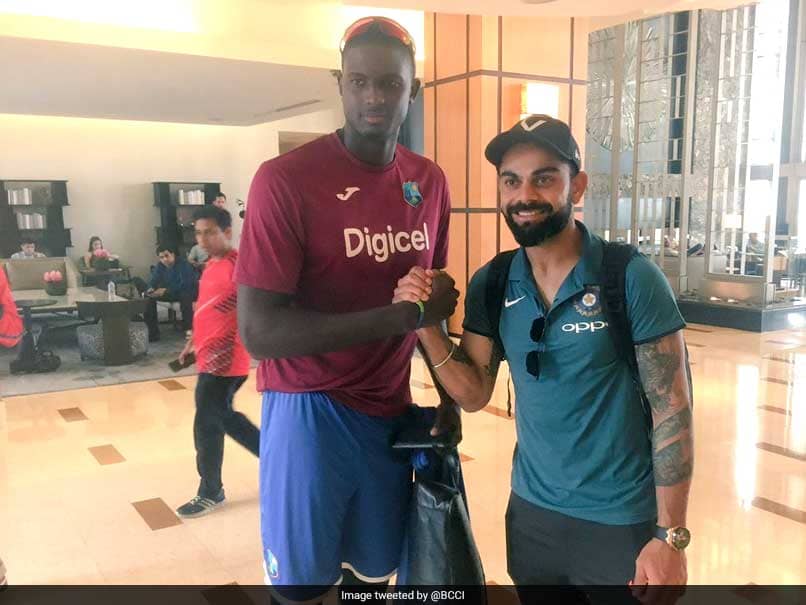 Under the captaincy of Jason Holder, the West Indies lost three-match ODI series to India.© Twitter

West Indies captain Jason Holder has set his sights on India captain Virat Kohli and spinner Ravichandran Ashwin ahead of the first Test of the two-match series, starting on Thursday in Antigua. After suffering defeats in T20I and ODI series to India, the West Indies are ready for the longest-format challenge that will mark the beginning of the World Test Championship for both the teams. "If we want to beat the top teams, we need to be up for the challenge. I am personally looking towards the challenge of playing against Virat and (Ravichandran) Ashwin. I think from a team perspective, we get the best out of ourselves when we play against the best, we tend to go hard at them," Jason Holder said.

"The mindset of the team is very positive as this is the start of a brand new series at home so we begin with great confidence. We have been playing some good Test cricket over the last few years and we have been able to put together some good series wins," he added.

"The start of the ICC World Test Championship is something special... it brings something extra special to the Test match format and the players know what's at stake and how we plan to go about our business."

Holder earlier this year rose to the top position among all-rounder in the ICC Test rankings. He is also in the top 10 among bowlers and is joined in the top 15 by the experienced new ball pair, Kemar Roach (184 wickets; average 27) and Shannon Gabriel (129 wickets; average 29). The skipper felt that the experience of the duo has helped them improve in the longest format of the game.

"Kemar and Shannon have been outstanding for us in the last few years. They always rise to the challenge and our bowling attack has been one of the main reasons why we have improved in Test cricket. We talk about batting well in partnerships, but it is also crucial to realise you have to bowl in partnerships as well," Holder said.

Holder said his focus is to win matches for the team.

"It's good to be listed as the Number 1-allrounder, but my aim is to win matches for West Indies. I enjoy Test cricket, the battles, the challenges... when I get the ball I look to hold down an end and let the quicker bowlers do their work at the other end," Holder said.

"With the bat, I look to build partnerships and look to get up to solid scores," he concluded.

Ravichandran Ashwin West Indies vs India 2019 Cricket
Get the latest updates on India vs England Series, India vs England , live score and IPL 2021 Auction . Like us on Facebook or follow us on Twitter for more sports updates. You can also download the NDTV Cricket app for Android or iOS.