Watch: Clash On Field As Bangladesh U-19 Players Get Aggressive With Indian Team After World Cup Final

Ugly scenes were witnessed after the U-19 World Cup final with the umpires having to step in to separate some of the players from both teams. 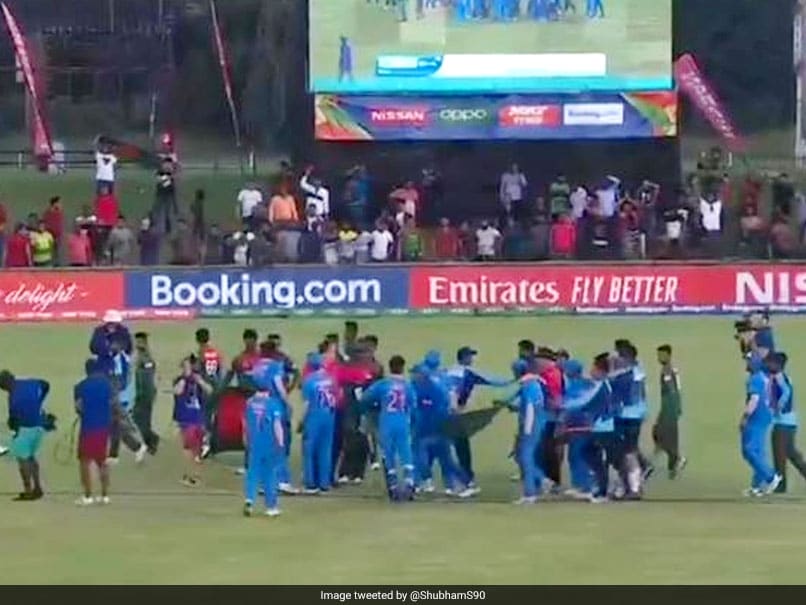 The Bangladesh players got overly aggressive after the team beat India in U-19 World Cup final.© Twitter

Bangladesh registered a shock three-wicket win via the DLS method over defending champions India to clinch their maiden U-19 World Cup title on Sunday. The Bangladesh bowlers were aggressive and got in the faces of the Indian batsmen from the very start after they had elected to bowl, having won the toss. Both Shoriful Islam and Tanzim Hasan Sakib bowled extremely well with the new ball but were also guilty of launching verbal volleys at the Indians. And after Rakibul Hasan hit the winning runs for Bangladesh, the emotions seemed to spill over for the victorious team as they aggressively charged onto the field, again getting into the faces of the dejected Indian players. It led to some ugly scenes after the final as the Indian players confronted their Bangladesh counterparts with the umpires having to step in to separate a few players.

According to a report in PTI, as soon as the match ended, it became tense with Bangladeshi players rushing to the ground and most of them still displaying aggressive body language. In fact, one India player rushed to confront and pushed a Bangladeshi player who had allegedly said uncharitable things and it was coach Paras Mhambrey seen calming his team.

Here are clips of the incident from various angles after the U-19 World Cup final:

Shameful end to a wonderful game of cricket. #U19CWCFinal pic.twitter.com/b9fQcmpqbJ

Note to that Bangladesh player/reserve that jumped aggressively at the Indian team that had just lost the biggest game of their lives. #Under19WorldCup #INDvBAN pic.twitter.com/UiW0T62Fz4

Bangladesh captain Akbar Ali, who was adjudged Player of the Match for his unbeaten 43, apologised on the behalf of his team and admitted that emotions got the better of some of his teammates.

"I don't know exactly (about the incident) but what happened should not have. In the final, emotions can come out and sometimes the boys were getting pumped. As a youngster it should not be happening. In any manner, we have to show respect to our opponents and we should have the respect for the game because cricket is known as the gentleman's game. So, I'll be sorry for my team.

"India-Bangladesh brings out the spark and before the World Cup final we lost the Asia Cup final to them. So the boys were too pumped up and wanted to take revenge. I will not say that it should be happening but I'm sorry from my side."

A dejected India captain Priyam Garg said that his team were fine despite losing the final but the reaction that came from the Bangladesh players after winning the final was "bad".

"Sometimes these things happen. Players can get emotional because there is so much at stake. Whatever happened wasn't good. I think it's not good for cricket as well. I think in the future you got to be careful with these things," said India coach Paras Mhambrey said of the incident.

Bangladesh U19 Yashasvi Jaiswal Priyam Garg Under 19 World Cup 2020 India Under-19 vs Bangladesh Under-19, Super League Final Cricket
Get the latest updates on ICC T20 Worldcup 2022, check out the Schedule and Live Score. Like us on Facebook or follow us on Twitter for more sports updates. You can also download the NDTV Cricket app for Android or iOS.