Ashes 2nd Test, Day 1: After his dismissal at the Adelaide Oval, David Warner made a young boy's day as he gave him his gloves while going to the dugout. 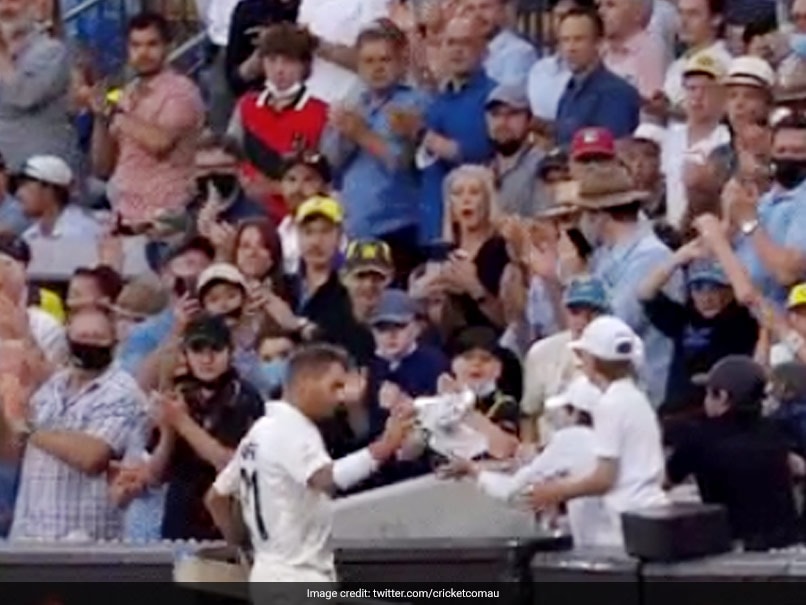 David Warner made a young cricket fan's day on first day of the ongoing second Ashes Test match on Thursday at the Adelaide Oval in Adelaide. Despite losing opening partner Marcus Harris cheaply, Warner dug deep to give a good start to Australia. The left-hander, however missed out on a century by a whisker against England. Warner scored 95 runs off 167 balls. He was dismissed by Ben Stokes in the 65th over. While making his way towards the dressing room , the swashbuckling batter passed on his gloves to a young kid in the stands, who was left visibly happy by the exchange.

Here is the video of the moment:

The post was well-received by fans with many hailing Warner's heartwarming gesture.

One user commented, "People need to appreciate this man more, what a player we have all had the joy of watching over the years".

Warner's action-packed innings included 11 fours and it looked like he would reach his ton but in the second delivery of the 65th over, Stokes bowled a short ball, outside off. Warner tried to cut it hard but it went straight to Stuart Broad at covers, who made no mistake.

With Warner departing, the onus now lies on Marnus Labuschagne and Steve Smith. The duo are currently unbeaten with Labuschagne edging closer to a century.

This was the second time in as many Tests that Warner missed out on registering a century. During Australia's first innings in the first Test, Warner was dismissed for 94 runs off 176 deliveries during. The hosts went on to win the match by nine wickets at The Gabba.

David Warner The Ashes, 2021/22 Australia vs England, 2nd Test Cricket Social
Get the latest updates on ICC T20 Worldcup 2022, check out the Schedule and Live Score. Like us on Facebook or follow us on Twitter for more sports updates. You can also download the NDTV Cricket app for Android or iOS.