Multilingual world number two Novak Djokovic said Wednesday he had missed out on a normal education and professed a hankering for the delights of university life. 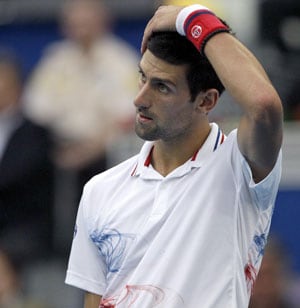 Multilingual world number two Novak Djokovic said Wednesday he had missed out on a normal education and professed a hankering for the delights of university life.

Speaking after cruising into the third round of the Shanghai Masters, the Serbian said: "I didn't have a childhood school education as probably most of my generation did in Serbia and around the world.

"I didn't go to school every day. The high school, I had to come back and do the exams two, three times a year. That was the case."

"I never went to university," he added. "Well, if I can say, that's one wish that I have in life, one regret, that I would like to go in some university, because I really like the idea of educating yourself and being a part of a group of students. It's a fun period in one person's life."

The 25-year-old, who speaks English, German and Italian as well as his native tongue, said he was "good enough" in school and his impressive language skills came naturally.

"I don't think that you can really learn that," he said. "You just have it in you. Both of my brothers speak a few languages. It's something that I guess we have in the family.

"The good thing about the Serbian school system is you need to have two languages in your primary school," said Djokovic. "English is the obligatory one, then the second one you can choose. I had German," he added.

The five-time Grand Slam winner, who began playing tennis at the age of four and made his professional debut at 16, said despite all the time on the road, chances to soak up new experiences were limited.

"Well, tennis is a very demanding sport. It's cruel in the way that you don't really get a lot of free time to do things that you would like, to go places you would like to see, and to maybe experience something else, to learn something new."

Comments
Topics mentioned in this article
Tennis Novak Djokovic
Get the latest updates on ICC T20 Worldcup 2022, check out the Schedule and Live Score. Like us on Facebook or follow us on Twitter for more sports updates. You can also download the NDTV Cricket app for Android or iOS.