Sumit Nagal has withdrawn from the India's upcoming away Davis Cup tie against Finland citing a hip injury and has been replaced by Saketh Myneni. 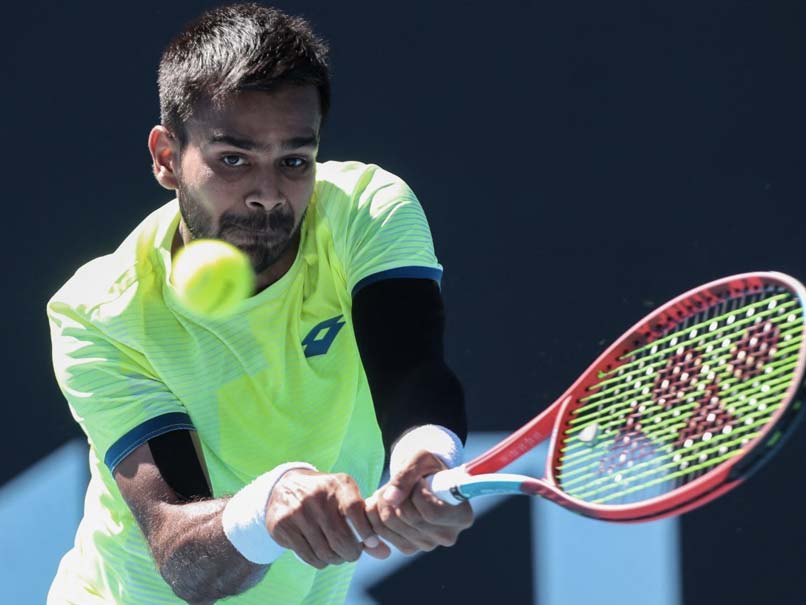 Sumit Nagal has cited a hip injury while pulling out from the Davis Cup tie against Finland.© AFP

Indian tennis player Sumit Nagal has withdrawn from the country's upcoming away Davis Cup tie against Finland citing a hip injury and has been replaced by Saketh Myneni in the five-man squad for the indoor contest on September 18-19. Nagal, who had lost in the first round of the US Open Qualifiers, communicated to the national tennis federation AITA on Saturday that doctors have advised him not to play on the hard courts. Non-playing captain Rohit Rajpal and chairman of the selection committee, Nandan Bal then discussed the replacement and agreed upon the name of Myneni, who last played for India in 2018 in the World Group Play-off tie against Serbia.

"Sumit Nagal has written to us that he can't play this Davis Cup tie due to a hip injury he sustained after the US Open qualifiers. Myneni can play both singles and doubles, so he has been added to the squad," All India Tennis Association (AITA) Secretary General Anil Dhupar told PTI.

Myneni has played six Davis Cup ties for India in eight nominations. He was part of the Indian squad that beat Pakistan in Kazakhstan in 2019 but did not get to play any match.

"I did not get to play tournaments since April. I could not get a visa to play in the USA also. But I have been training and playing practice matches all these months. It's good to be back in the team," Myneni told PTI.

"I just have to be ready for my chance. I have done it in the past. I will help the team prepare well. Overall, I feel good about my game but the match sharpness may not be at the same level."

Nandan Bal said Myneni was best option. "Saketh was unanimous choice to replace Sumit under the circumstances when matches are going to be on fast hard courts. He has been around for along time and knows what it takes to perform at that level. You can use him for both singles and doubles matches. He is a good team man," Bal said.

Ideally a six-player squad would have been ideal for variety in hitting partners but Nandan Bal reckons it should not be an issue.

"In pre-Davis Cup camp, the practice sessions are more of tactical than technical. These camps are about sharpening the players for match-play. I don't see any issue, plus Rohan and Divij can pitch in.

"These are not going to be six or eight hour sessions where you are getting them conditioned physically. These are to get them used to conditions, and ambience and basically to make them match-sharp," he added.

Mukund had not made himself available for national selection before the Davis Cup team was announced, saying he had committed himself to play European circuit. Rawat is placed higher but Myneni was preferred because the tall Andhra Pradesh player can play both the formats if need arises and also that he already possess a Schengen visa.

Procuring visa could have been difficult at a short notice for Rawat when the team is set to leave for Finland on September 8.

Myneni thus joins, Prajnesh Gunneswaran (156), Ramkumar Ramanathan (204), Rohan Bopanna (46 in doubles) and Divij Sharan (83 in doubles) in the team that will take on host at indoor hard courts.

The winner of the tie will make it to the Qualifiers while the loser will fight in the World Group I Play-offs in the 2022 season.

Finland have one higher-ranked singles player in Emil Ruusuvuori, who is placed 76th in the ATP chart, while India do not have a player inside top-100.

Finland also has two decent doubles players in Henri Kontinen and Harri Heliovaara, who are ranked 44th and 76th respectively.

Comments
Topics mentioned in this article
Tennis Sumit Nagal Saketh Myneni
Get the latest updates on IPL Auction 2023 and check out  IPL 2023 and Live Cricket Score. Like us on Facebook or follow us on Twitter for more sports updates. You can also download the NDTV Cricket app for Android or iOS.