Djokovic is no superman after all 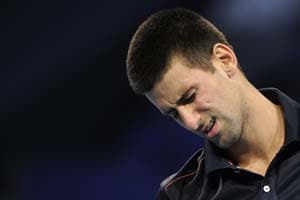 The signs of a packed season are clearly evident. With the season in its last leg, the body is wearing off and with it the aura of invincibility.

The signs of a packed season are clearly evident. With the season in its last leg, the body is wearing off and with it the aura of invincibility. Even though what Novak Djokovic has achieved this season is nothing less than super human, the Serbian in reality is no superman but a mere mortal like any of us.

Djokovic was eliminated at the round robin stage of the ATP World Tour Finals after going down 6-3, 3-6, 3-6 to compatriot Janko Tipsarevic on Friday, his second loss in the competition. It was Tipsarevic's first win over Djokovic in four attempts. On Wednesday, the World No.1 had been hammered 6-3, 6-1 by David Ferrer in Djokovic's second match of the ATP Tour Finals. A match before he was stretched to the limit by Czech Tomas Berdych, who should have actually won the game, but for the Serb's tenacity.

Clearly, there is only as much a player's body can take in a season. His body has been demanding rest for quite sometime now. Djokovic has been phenomenal in 2011 but that has meant he has probably played more matches than most players, considering he has gone all the way to the final in 11 tournaments and won 10 of those, including 3 Grand Slams, which are a best of 5 contests unlike other tournaments that are best of 3.

His problems started in August with the injury backout in the Cincinnati Masters final against Andy Murray that handed the title to the Briton. That was followed by him pulling out of Serbia's opening singles against Argentina in Davis Cup semi-finals in September and then quitting midway the match against Juan Martin del Potro two days later, enabling Argentina to progress to the final of the tournament. Then the pull out from China Open and Shanghai Masters in October, and again an injury induced exit from the Paris Masters, a tournament that fetched him $1.6 million only for making an appearance.

According to ATP rules, the top players are each entitled to a bonus at the end of the season provided some conditions are met. The rules demand that the top players appear in all eight mandatory Masters tournaments to receive their full payment, or at least seven to collect a slightly reduced sum. As the world number one, Djokovic was entitled to $2 million from the bonus pool. However, he lost $400,000 of that amount by failing to play in Shanghai, one of the eight obligatory Masters 1000 events. Had he missed Paris - his second Masters absence - his $1.6 million would have shrunk to nil. Djokovic was said to be in a $1.6 million dilemma before the start of the Paris Masters as he was yet to regain full fitness but the money at stake was too high. He opted to take a chance and battled through two matches before giving up in the third and in the process putting more burden on an already exhausted body.

For a long time now the players have been crying to the ATP for a shorter season with World No. 2 Rafael Nadal leading the way. Not surprising given the fact that he probably has the most physical game among all players so the toll on his body is even higher as is obvious from his form this season after a stellar 2010, when he won the most titles and played the maximum matches. Quite frankly it is about time that the tennis body paid heed to players' cries as nothing can and should be more important than their health and fitness. An athlete's shelf life is anyway limited, why cut it short further only because the workload that could have been managed was not due to the commercial interests of the officials and the sponsors.

Comments
Topics mentioned in this article
Novak Djokovic Tennis Rafael Nadal
Get the latest updates on IPL 2021, IPL Points Table , IPL Schedule 2021 , live score . Like us on Facebook or follow us on Twitter for more sports updates. You can also download the NDTV Cricket app for Android or iOS.